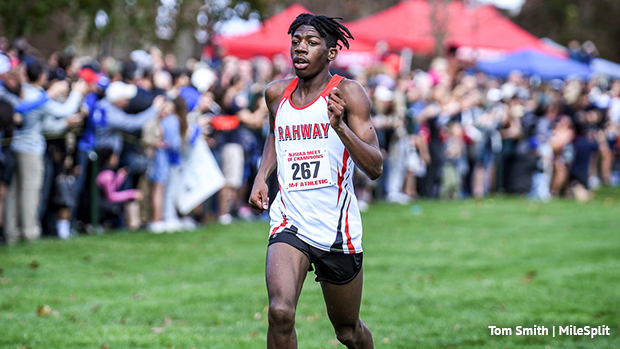 We have some recent college commitments and signings for past Meet of Champions winners to announce!

This article will focus on announcements that made it to our database in November, some were already covered and or committed earlier in September and October. If you are from New Jersey and haven't added your commitment check out how to do so.

Rahway's star senior Micah Lawson has signed with Rutgers University to continue his education and athletic career after high school.

With his 15:33 during MOCs Lawson finished the fall ranked fourth overall at Holmdel Park having dropped over a minute from his previous best performance on the course in 2021 when he finished 52nd at the same meet.

Last spring Lawson finished second in the 1600m during the NJSIAA Outdoor Meet of Champions and had a season full of major PRs including a 4:16.84 mile time, and 1:54.88 over 800m. The leading returner for New Jersey in the 400m hurdles, US No. 13, Brooke'Lyn Drakeford has announced her commitment to the University of Virginia.

The sprints and hurdles star out of Piscataway Twp won her first NJSIAA Meet of Champions individual title last spring closing out an undefeated six-win season in the 400m hurdles. During which she ran under 62 second three times and set a PR of 61.73 ranking NJ No. 2 and US No. 28.

Drakeford joins Cate DeSousa of Red Bank Catholic as a future teammate from New Jersey, DeSousa committed to UVA back in September. Howell's star jumper Samantha Strydeski has finished fourth or better in the high jump at the NJSIAA Meet of Champions three times over her high school career. That's including the 5-08 clearance to win the 2022 outdoor championship.

She has chosen the University of Pennsylvania to continue her educational and athletic careers.

Additional note: New Jersey has four girls returning in the top 20 nationally for the high jump with 5-06 or better! Norina Khanzada of Tenalfy T-US No. 9 at 5-07, Samantha Strydeski of Howell, Alanna Woolfolk of Clayton, and Elsa Spoor of Chatham all tied for US No. 20 with 5-06 indoors.

Strydeski joins New Jersey's Nicholas DeVita and Ryan Matulonis, both of Seton Hall Prep, who are also heading to UPenn. During his 2021 outdoor campaign Gonzalez saw major improvement as a sophomore hitting marks over 180 feet FOUR times to close out the season which brought home a South Group 4 Sectional title, Group 4 state title, NJSIAA Meet of Champions victory, and a fourth place finish at Outdoor Nationals. While this article was focusing on Meet of Champions winners to keep it locked down in length, we had some recent stand out athletes who have been so close to winning MOCs titles also commit in November.

Ajanae Thompson to Villanova University - The star sprinter out of Union Catholic has finished second at the Meet of Champions twice in past years and has brought home multiple Non-Public A state titles along with plenty of outstanding performances on strong Union Catholic relay squads. PRs of... 8.00 (en route) in the 55m hurdles which is US No. 6 among returners, 13.91 (0.4) in the 100m hurdles, 12.03 (0.2) for the 100m.

Patrick Ditmars to Iona College - Led Cherokee to a third place team finish during the stacked NJSIAA Cross Country Meet of Champions. Was second overall with a time of 15:39 just six seconds back from race winner Micah Lawson. That was an improvement of 49 seconds from his previous Holmdel Park PR of 16:08 in 2021. On the track Ditmars owns PRs of 4:15.26 for the 1600m and 1:55.01 for the 800m.

Leah Howard to Texas Tech University - The Millville javelin sensation took off as a junior last spring increasing their PR to 148-2, the mark that won a Group 4 State Championship, and finishing second at MOCs. She threw over 130 feet six times in 2022 and was second at the Meet of Champions while doubling for 12th at New Balance Nationals Outdoor that same weekend. Howard is the top ranked New Jersey returner and US No. 12 among javelin throwers heading into outdoor track and field. This only lists those entered to our database as of November 19th, 2022. This particular article will not be updated.

If you are a New Jersey college coach and have a list of athletes heading to your school feel free to submit on the form or send them in bulk, including the information requested on form, to robert.kellert@flosports.tv. Here are the class of 2023 New Jersey high school athletes with college commitments or signings recorded in our database as of November 19th. This particular article will not be updated but you can check an updated list here.