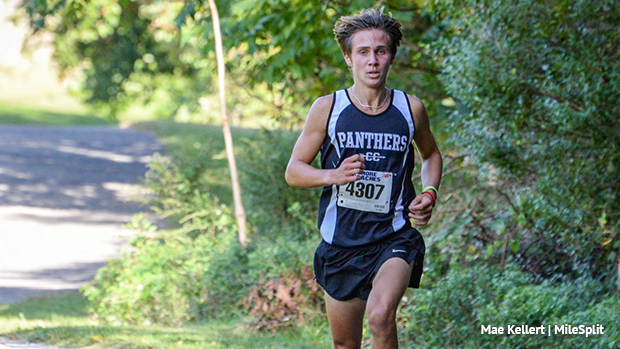 They were heard loud and clear as they burned up the trails at historic Holmdel Park with red hot performances on a sun-splashed day to highlight the boys action.

Union Catholic, ranked No. 4 in NJ, received seven Holmdel PR's and turned in the top team performance of the meet by cramming its top five runners in the top nine and averaging a school record 16:31, the fastest of the day, to run away with the F Division race, 25-84 over runner-up Haddon Heights. UC also finished first in the team merge, 153-262 over No. 1 ranked Ridge.

Senior Shane Brosnan, who closed in 5:06 for the last 1.1, led the charge for UC by finishing first in 15:50, which equals the fastest time ever run by a Union County runner on the venerable 3.1-mile layout. Sophomore Jimmy Wischusen was second in 16:07, Myles Plummer was fifth in 16:27, Caudell Cajuste placed eighth in 17:04, and Ryan Cichocki finished ninth in 17:05.

Brosnan's 15:50 matched the Union County course record that Cliff Sheehan of Westfield ran in 1980, and Jeff Perrella of Westfield matched in 2005. Union Catholic coach Mike McCabe, whose team will surely move up in the state rankings this week, was very pleased with how his guys raced.

"I was happy with how the guys executed the race plan,'' said McCabe. "It was a strong team effort.''

One of UC's biggest goals this season is to win a state championship. McCabe knows there is a lot more to be done, and that winning the first state title in school history will be very tough.

"I think it will be very difficult to win the state championship,'' said McCabe. "CBA is a very good team with terrific coaching. We will take it day to day and work to improve.''

Individually, all the pre-race buzz was around how low Langon and Jackson Barna of Ridge go.

But unfortunately, the Georgetown-bound Barna, who blasted a course record 14:41 at Ocean County Park last month, rolled an ankle going down the bowl. He didn't want to risk making it worse, so he dropped out.

In the very next race, Langon hammered out a Somerset County course record 15:30, N0. 16 in course history, to blitz the competition in the A Division race. Langon ran 5:10 for the first mile, 5:10 for the second mile, and dropped another 5:10 for the last 1.1. The former Somerset County record for Holmdel was 15:39, which was set when Bobby Papazian of Gill St. Bernard's won the 2004 Meet of Champions.