New Jersey's track and field athletes unleashed a strong finishing kick when one of the most unique seasons in state history came across the finish line this weekend.

But before we dig into all the great highlights, I have to throw out a shoutout to all the coaches, meet directors, AD's and most importantly all the athletes across the state for making this season the best it could be. The creativity and adaptability that went into producing so much quality competition under very difficult circumstances with several pop-up indoor quad meets, and old school polar bear duals etc. was very impressive. Well done, everyone!

Ok, let's get into this NJ rewind as many of NJ's best showed that they are primed for a huge outdoor season with sensational performances this weekend.

In the girls competition, junior Charlotte Bednar of Lawrenceville won the 5K in 16:44.21.

Bryanna Craig, who moved from Millville to Texas last year, racked up 5,117 points to win the heptathlon. That's No. 36 in the world all-time!! Craig, a junior at Coronado High, won the heptathlon at the 2019 New Balance Nationals.

Connor Munson of Westwood turned in remarkable performance in the decathlon, placing second with a Bergen County record and NJ No. 4 all-time 6,197 points. The former county record of 6,069 was set in 2012 by Taylor Cudequest of Pascack Hills.

Junior Angelina Perez of Lakeland dropped a pair of PR's when she took third in the two-mile in a Passaic County record 10:33.86, and was eighth in the Emerging Elite mile in 5:06.30.

Camryn Wennersten, running for the Garden State Track Club, placed a very impressive sixth in the girls one-mile run in 4:55.47. The race, like many others on Sunday, was run in very strong winds,

Sophomore Reese Fahys of East Greenwich High in R.I, who ran at Middletown South last year, was seventh in the two-mile in 10:38.88 and won the Emerging Elite mile in 4:59.92. Both times are massive PR's for Fahys.

Ryan Allen of Kingsway crossed first in the racewalk in 15:50.14. 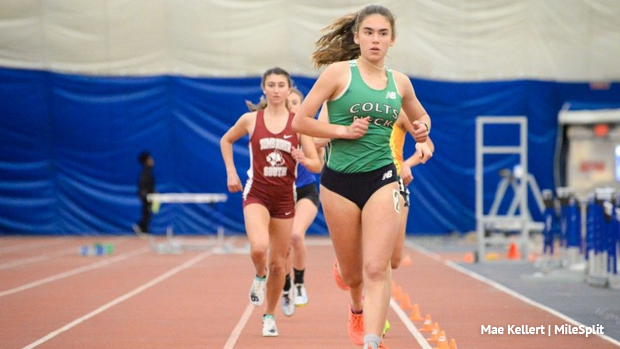 Talk about going out with a bang!

On the final throw of his high school indoor career, Cole Tucker of Colts couldn't have scripted it any better, unloading a Monmouth County record, NJ#8 all-time and US #1 65-4 to win the shot put!

Lily Shapiro of Colts Neck won the girls 1600m with a huge PR and NJ#1 4:49.52, more than a three second PR. Sophomore Cate DeSousa of RBC dipped below 5 for the first time ever with a runner-up finish and NJ No. 5 (including mile conversions) of 4:58.33.

Serrao dropped his PR and NJ#1 time down to 7.56 to to win the 55, hurdles. Sure is so strange seeing the hurdles run at 55m outdoors!

Elizabeth's Antonio Roopchand, Zyeim Lawrence, Greg McQueen, and Wendell Cadet ran the fastest 4x400 time of the season with a winning time of 3:26.06.

The biggest NJ high school highlights came in the 800m and from the Sharpe triplets in the dashes.

The girls 800m race featured a rising freshman star from Columbia, Peyton Hollis, who ran a NJ#1 2:14.16 to finish third. Lindsay Colflesh of Haddonfield was fifth in 2:15.33.

In the boys mile, Conor Murphy, who starred at Allentown and Rutgers, ran 4:14.35 to place second, and Rey Rivera, the former star at Old Bridge and Georgetown, was fifth in 4:20.17. It's great to see Rivera racing again!