The thunderous roars of sheer joy that came between all the high-fives and fist-bumps could be heard echoing throughout Holmdel Park on Tuesday afternoon.

It was coming from the Union Catholic boys and girls cross-country teams and their supporters, who had every reason to be loud and proud because the Vikings had just pulled off a rare sweep of the State Non-Public A Championships, which touched off a spirited celebration.

This meet was originally scheduled for last Saturday, but was postponed due to severe storms.
How rare is a Non-Public A sweep?

Union Catholic is the first program to win both the boys and girls Non-Public A titles in 27 years! Paul VI is the last program to pull it off back in 1994.

How did it happen?

Then in an eagerly anticipated showdown between the state's two best teams, the No. 1 ranked Union Catholic boys, defeated No. 2 ranked Christian Brothers Academy, 32-43, to win its first state championship ever.

CBA, which owns the state record with 30 state championships, had won four in a row and nine of the last 10.

The Union Catholic boys are the first team other than CBA or Don Bosco Prep to win the Non-Public A title since 1995!

The team sweep is the greatest accomplishment in the history of the UC program!

"This is the best day in the history of our program,'' said Union Catholic coach Mike McCabe. "The girls really closed well and came back to beat a very strong  Kent Place team. And the boys have been building for this all season, and they all stepped up with their best races ever here at Holmdel. It's the biggest win ever for our boys!'' 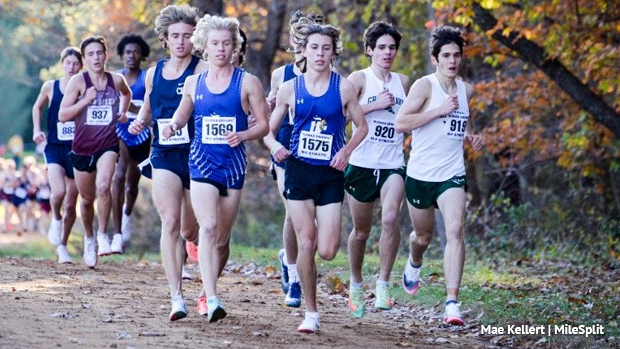 The UC-CBA matchup had been hyped up all season, and each team rose to the challenge with their best races of the season. Both teams had all of its scoring runners break 17, and CBA and UC took 10 of the top 16 places.

Union Catholic's frontal attack once again set the tone for the Vikings as senior Shane Brosnan (15:45) and sophomore Jimmy Wischusen (15:48) went 1-2 as they threw down the two fastest times ever by Union County runners in the history of Holmdel Park. Westfield's Cliff Sheehan (1980) and Jeff Perrella (2005) had shared the record of 15:50. And Wischusen's 15:48 is tied for the fourth fastest ever run by a sophomore in the history of the course. Holmdel's current course has been used for the State Championships since 1979!

All five scorers for UC ran Holmdel personal bests, which added up to a sizzling 16:13 average, the eighth fastest average in course history.

CBA, which suffered some misfortune when star freshman Joe Barrett lost a shoe just before the mile mark and eventually had to drop out, averaged 16:25.

Brosnan said winning the first state title in school history has been something UC has targeted for a long time.

"We've been training hard since the summer to make history,'' said Brosnan. "We've been building every week this season for this, so it feels great to see it all come together.''

Plummer, who dropped his Holmdel PR by 16 seconds, said he's dreamed of this moment since his freshman year.

"For the last four years, this is something I've always thought about,'' said Plummer. "All the hard work paid off for all of us. We knew we'd all have to run our best, and we did. I can't say enough about how well everyone ran. Caudell and Ryan are very strong 4-5 guys for us, and it took all five of us to put this puzzle together.''

UC and CBA will clash again this Saturday at the Meet of Champions at Holmdel. The girls race is at 11 a.m. and the boys at 11:45.

"We know we have to do this again in a few days, and it will be another tough race,'' said Plummer. "But we will be ready.''

CBA coach Sean McCafferty was proud of how his guys ran.

"If Barrett doesn't lose his shoe it's neck and neck, probably a one or two point meet either way, which is how we thought it might go, '' said McCafferty. "He ran for another mile and we pulled him off so he didn't hurt his foot. He's okay. Saturday will be another bad ass race.''

Does McCafferty like his chances of avenging this loss at the Meet of Champions?

In the girls race, Kent Place, seeking its first title since winning the State Non-Public B title in 2013, opened a big lead as expected up front, taking a 13-29 advantage over UC after each team had three runners across the line. But UC's No. 4 and No. 5 runners each finished ahead of Kent Place No. 4 runner to give the Vikings a heart-pounding 77-78 victory.

Some of the biggest keys to victory for UC was junior Maameyaa Nyinah out-kicking two runners over the final 100 yards, and junior Kaleigh Gunsiorowski picking off a runner late in the race to help the Vikings secure the victory.
UC's top five were Gunsiorowski, a first-year XC runner who closed fast to place fourth in 19:27, sophomore Leilani Gibson, 11th in 20:04, senior Abby Granrath, 15th in 20:17, Nyinah, 20th in 20:51, and senior Jenna Keith, 27th in 21:10. Four of UC's top five ran PR's for Holmdel Park. Asydiah Pray-Brown (40th in 21:38), and junior Victoria Urbaez (52nd in 22:20) were the No. 6 and No. 7 runners for the Vikings.   "This means the world to us,'' said Granrath.
"We have so many state track titles, and me and the other seniors have been working for this for the last three years, putting in so much time and dedication and training for this moment. We knew it woiud be another close race with Kent Place, and we all just executed our race plans It came down to who wanted it more, and winning was in all of our hearts.''

Cate DeSousa came into the girls Non-Public A race as the big favorite, and she didn't let anyone challenge her as the RBC junior took control of the race right away and just kept rolling on her way to victory in 18:33.

DeSousa is the eighth girl from RBC to win a state XC title, and the first since Molly McNamara won in 2010.

DeSousa grabbed a 10 second lead with a 6:12 first mile, had a 15 second gap coming out of the bowl, and was up by 20 seconds as she charged toward the tennis courts.

"This is something I've always wanted to win,'' said DeSousa, who won state titles on the track in the 800 and 1,600 last spring. "I remember seeing Nicole Vanasse of Pingry win this race when I was a freshman, and ever since then I wanted to get this championship. It was tough not having this race last year because of Covid, so to come back this year and win this is such a great feeling.''

DeSousa said time wasn't really on her mind today, but it will be on her mind at the Meet of Champions.