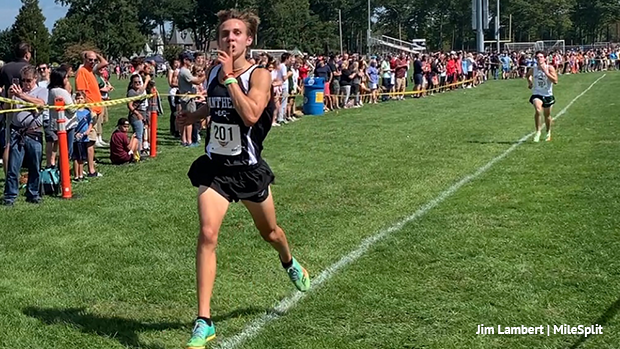 Marco Langon and Lindsay Hausman came up with big statement victories, and the Mendham and Kent Place girls and North Hunterdon and Union Catholic boys turned in the most impressive team performances at Saturday's Roxbury Invitational at Horseshoe Lake Park in Succasunna.

Over 1,000 runners crossed the finish line in the 10 races combined on a sun-splashed day, and several runners dropped huge PR's on NJ's opening weekend of the XC season.

Langon, who ran 9:03.50 for 3,200 and 4:09.47 for 1,600 last spring, produced the most dramatic win of the day when he used his wicked kick to catch Delbarton's junior twins Collin and Brian Boler over the final 300 yards before he hammered his way across the line first in 15:23.5. Langon led four guys under 16 in the boys Fastest 4 race in what was one of the fastest races in course history. Langon's time is No. 2 all-time in Horseshoe Lake Park history, just behind the course record of 15:19.5 set in 2007 by Doug Smith of Gill St. Bernard's.

With just 500 yards left in the race, Langon trailed the Boler twins by about 20 yards, but Langon said he had them right where he wanted.

"I never had any doubts,'' said Langon,'' whose previous PR was the 15:43 he ran at Thompson Park in Jamesburg last year. "I know how strong my kick is and I knew I'd be able to catch them. It was important for me to come out here and get the season started off with a win. I saw that I was ranked fifth in the state, and that has really motivated me to come out and prove to everyone that I'm better than that.

Langon, fourth in the 1,600 at the M of C last June, said he feels he's capable of winning the Meet of Champions title in November, and that people better not sleep on him.

"There's are lots of great runners in the state, like Jackson Barna from Ridge (the 3200 Meet of Champions winner last spring), but I know what kind of shape I'm in, and I feel like I can run with anyone in the state'' said Langon.  "Last year I got hurt (hamstring) and couldn't finish the sectional race, so this year I'm really motivated to win and show everyone what I can do.''

The top girls performance of the meet belonged to Hausman, a junior at Kent Place.

Hausman, second in the 3,200 at the Meet of Champions last spring in 10:46.41, showed how fit she is by running away from the field over the final two miles of the girls Fastest 4 Race to win with a PR of 18:27.7, No. 10 in course history. Hausman finished 21 seconds ahead of Chatham junior Lindsey Bresnahan, who dropped a huge PR of 18:48.9.

Hausman, whose biggest goals are to win the Union County title and run around 18:30 at Holmdel Park, was very excited about the way she raced. (Listen for yourself in the interview with Hausman below)

Kent Place also received a 19:45 from sophomore Addison McGoey, a 20:10 from freshman Olivia Hand, and a 20:45 from junior Noe Nalavala. And with senior Miranda Lorsbach (an All-Stater in XC last year) rejoining the team this year (she ran for her club last year), Kent Place has a great shot to win its first Union County title this season, and it should contend for the state championship. Lorsbach, who owns a 19:01 Holmdel PR and ran 10:42.36 for 3,200 last year, could make her season debut for Kent Place at Garret Mountain next week.

In the boys team competition, No. 3 ranked North Hunterdon, which graduated a lot of talent from a very strong squad, showed just how deep they are under coach Tom Higgins. The Lions were the top pack of the meet edging No. 5 Union Catholic, 44-46, for the Fastest 4 title, winning the Future 4 race, 33-34 over Chatham, and capturing the JV title!!

The Lions, which picked up several PR's, were led by senior Aaron Wysocki, eighth in 16:11, senior Carter Beswick, ninth in 16:14, and junior David McKinnon, 10th in 16:17, picked up several PR's, and had five guys run under 17 on the day. Junior Jeremy Bavaro won the Future 4 race for North Hunterdon in 16:57, a 63 second PR), and junior Asa Alderman ran 16:58 in the Fastest 4 race. All those times are PR's for North Hunterdon's runners.

A deeper look into the boys Fastest 4 race this race shows that Union Catholic is even better than its No. 5 ranking. The Vikings, running without its two best runners, senior Shane Brosnan (who ran 4:09.46 to get third in the 1,600 at the M of C last spring), and senior Myles Plummer (the Union County XC champ last year) still had a 4-man average of 16:35 and only lost to No. 3 North Hunterdon by two points.