Welcome to the 2022 preview of the NJSIAA South Sectional Championships.

This article includes some just for fun winner predictions, some quick notes on team and individual battles, as well as a look at last year's winners.

Those of us at NJ MileSplit want to wish all of our high school athletes and coaches the best of luck this weekend across the state. A lot of work has been put in by these athletes since summer and beyond for this point in the season.

Individuals: One of the few races all three prediction picks are different! Jorge Cruz Valle of Wildwood was the top returner for this Section at DREAM Park by 19 seconds with his 16:50 for third at Sectionals last fall. However there were some major gains by a few athletes since then including Aiden Williams of Audubon and Elijah Whitaker of Glassboro.

Williams and Whitaker have both hit major course PRs including at Holmdel where they clocked 17:20 and 17:24 respectively to trim well over a minute each. Williams leads South Group 1 at DREAM Park, 16:31, as well as at Holmdel.

Looks for a battle between these three juniors.. or maybe someone like Joseph Gaspari, Rylan Martinelli, Ty Blackman or others could throw their hat into the mix.

Teams: Haddon Township looks to get back on top with a win in this Section after Audubon took home their second straight last year. Audubon, Maple Shade, A P Schalick among top teams. Final spots up for grabs! Individuals: George Andrus has been in the drivers seat of the No. 6 Haddonfield boys all season and enters Sectionals Saturday as a favorite for South Group 2. There are plenty of tough racers in this field though. Alexander Boyko of Cinnaminson has picked up plenty of pace this fall. Jack Bolling, Nicholas Loffredo, Matt McCarron, Colin Patterson will all be on the hunt.

Teams: No. 6 Haddonfield, No. 17 Haddon Heights, and Cinnaminson, who has also been around the top 20, should lead the team standings here. The final two spots will be close between Barnegat, Collingswood, West Deptford, Manchester Township, Seneca. 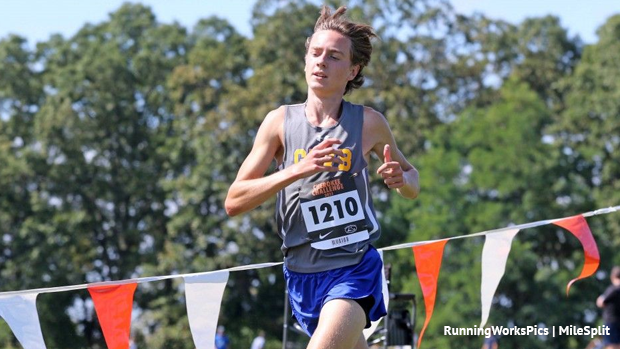 Individuals: Peyton Shute of the Gateway/Woodbury Co-op jumps up to the Group 3 race this year but outside of any unforeseen circumstances should earn this title with room to spare. Nick Scarangelli, Matthew Littlehales, and Gavin Gallo among others running toward the front.

Teams: Highland Reg has the edge going in but could be a close fought race between Highland Reg, Ocean City, and Shawnee. Moorestown, Clearview, Delsea, and others fighting for the final advancement spots.

Individuals: Cherokee teammates Nick Kuenkel and Patrick Ditmars will be leading a strong upfront team effort for their No. 3 ranked squad. The individual victory could likely come down between them. Fabian Ramales, Conor Jacob, Nicholas Krol, and others will battle in the usual Group 4 traffic jam of advancement. Though many of these names will move on through their team regardless.

Teams: NJ No. 3 Cherokee looks to roll through Sectionals without incident and move on fully focused to the Group 4 Championships battleground at Holmdel Park next week. No. 11 Southern Regional should run well and will be ready to take advantage if there are any missteps from the favored team. No. 20 ranked Cherry Hill East in the same boat. After those three it's a fight between Lenape, Williamstown, Washington Twp, and others for those final advancement spots. Individuals: A big rematch for South Group 1. Meghan Lex of Haddon Township won this race last fall by over 20 seconds, she also leads all South Group 1 athletes with recorded times at DREAM Park this season by over 30 seconds. Lex also has the extra motivation to get the one card for a possible tight team score race. But sophomore Macie McCracken of Wildwood has added experience this year, after finishing second to Lex in 2021, and picked up the pace on her repeat course so far year over year. Keep an eye on this showdown at DREAM Park! Genevieve Gentlesk of Haddon Township could also be a part of this individual winner discussion.

Teams: This is an interesting one. A lot of this is going to depend on the size of the field that toes the line on Saturday for Group 1. Haddon Township should take the win but depending on how Maple Shade's mid-pack fit into scoring it could bring that scoring total close. Schalick is right there competing as well and a few teams have an opportunity for advancement to Groups with the final spots.

Individuals: We could see a number of Haddonfield girls in the mix to win this one with their team likely packed up front. Ava Thomas likely leads the charge, teammates Riley Austin and Audrey Naticchia not far behind. Stephanie Renouf of Cinnaminson is the top athlete in contention for the win who won't be wearing a Haddonfield uniform.

Teams: No. 2 Haddonfield should roll to a 13th straight Sectional title on Saturday which would be their 30th overall. In 2021 they ran a perfect score of 15 in this race! The four remaining advancement spots aren't so simple. These South Group 2 teams need to show up with their best stuff, this race is going to be intense! Haddon Heights, Sterling, Seneca, Cinnaminson, Middle Township, and more are in contention to advance. Teams: No. 4 ranked Clearview are favorites to win in this Section for the second straight year. No. 9 Ocean City, and No. 18 Mainland should advance without too much of an issue. Moorestown worked their way to our Top 20 bubble list and could see Group advancement. Final spot will be a tough race between Toms River South, Delsea Regional, Shawnee, and Highland Reg. We are going to learn a lot more about a number of teams in this deep race.

Teams: This Section has received a shake up since the original outlook back in September. Toms River North, Cherry Hill East, Southern Regional, Washington Twp will compete as a solid top four and could we still see a Cherokee squad who lost a key part of their top five still fight their way to Group advancement? A bunch of good teams who have been on the bubble or were once ranked competing in this one.