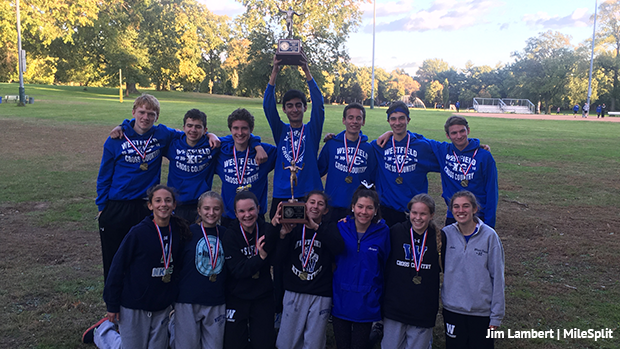 Westfield swept the team titles, Jerika Lufrano of Union Catholic surprised herself and Maximus Russo of Oratory made history at Wednesday's 81st Union County Championships at Warinanco Park in Elizabeth.

The NJ #10 Westfield girls avenged its loss at the Union County Conference Championships last week with a 41-44 victory over NJ #8 Union Catholic to capture its third straight title extend its record to 18 titles  overall. Last year, Westfield edged Gov. Livingston by one point and Union Catholic by two for the title.

In the boys team race, NJ #4 Westfield threw down one of the best performance in the history of the 3.19-mile dual meet course by putting its seven runners in the top 11 and averaging 16:29.2, the third fastest average in course history. The Blue Devils rolled to a 30-73 victory over runner-up Scotch Plains to win its fourth straight title and extend its record to 36 county championships. The second place finish for Scotch Plains is its best finish at the county meet since 2002.

Individually, Russo, a junior who ran at Summit last year, became the first boys champion ever from Oratory when he pulled away over the final mile to win in 16:07, eight seconds in front of runner-up Ben Fleischer of Scotch Plains.

In the girls race, Lufrano, who only ran 10 miles in the last 10 days because of a minor foot injury, executed her race plan to perfection as she beat two-time champion Victoria Vanriele of Gov. Livingston. Lufrano made a strong move with a half mile left and came charging across the line first in 19:03. Vanriele, who set the course record last year when she won in 18:26, was second in 19:14.

The victory by Lufrano reversed the outcome of last year's race when Lufrano was second to Vanriele in 18:30, the second fastest time in course history. Lufrano, UC's second girls winner ever (Caitlin Glynn won in 2014) also denied Vanriele's bid to become the fourth girl to ever win three straight titles.

Lufrano's status was up in the air until Tuesday.

"I didn't know if I'd be racing until yesterday,'' said Lufrano, a senior. "And I wasn't sure what to expect since I haven't run very much lately. I was really just running to help my team , but I wound up really surprising myself. It's a great feeling to win my first county cross-country title. I'm very proud to come back and run as well as I did."

The girls team race also featured a reversal of fortunes as Westfield used its three-point loss to Union Catholic at the Union Conference Championships as motivation.

"Our race plan last week fell apart and we never recovered,'' said Westfield coach Jen Buccino, whose team averaged 19:46 and had a 1-5 split of 40 seconds. "We had a talk with the team and told them that they had to execute their races better if they wanted to be county champs. The loss last week ignited a fire under them and they all ran much better this week.''

Westfield, led by third-place finsher Sarah Hacker (19:16)  trailed Union Catholic, 22-27, after each team had four runners across the line, but Westfield was able to get its No. 7 runner (Brianna Hatch) in before UC's No. 5.

"The back of our pack ran very strong and that was one of the keys for us,'' said Buccino.

A couple other big keys for Westfield were the finishes by junior Grace Morgan, eighth in 19:47, and sophomore Caroline Collins, 11th in 20:03.

At the conference meet,  Morgan lost a shoe during the race and didn't score, and Collins had an off race and was Westfield's No. 5 runner. This time Morgan was the No. 3 runner for her team and Collins was No. 4. Sophomore Sammy Salz also had a great race for Westfield, placing fifth in 19:39. Salz has dropped well over a minute off her PR from last year.

Morgan was relieved to finally have a big race for her team.

"Two races ago I got a charley horse during the race and didn't finish at Shore Coaches, and then my shoe came off last week, so I am so happy and relieved to finally run a good race and help our team win,'' said Morgan. "We all knew it would be another close race with them (Union Catholic) and we had to run better than we did last week to win. And everyone ran great for us today.''

On the boys side, Westfield put on a pack running clinic as the Blue Devils averaged 16:29.2 and had a remarkable 1-5 compression of just 18 seconds and a ridiculous 1-7 split of 21 seconds!!!!

Westfield was led by junior Kevin Yucetepe, third in 16:20.

Yucetepe said Westfield, which held out its top guns last week when it placed second to Scotch Plains at the conference meet, wanted to make a statement.

"We wanted to come in here and keep our pack together, and when someone made a move, we responded,'''  said Yucetepe, who started running XC last year. "Our goal is to win some big championships at the state meets, so we wanted to have a strong race today. This was a big confidence booster for us, and now we have to stay healthy and keep working hard to get ready for the state meets.''