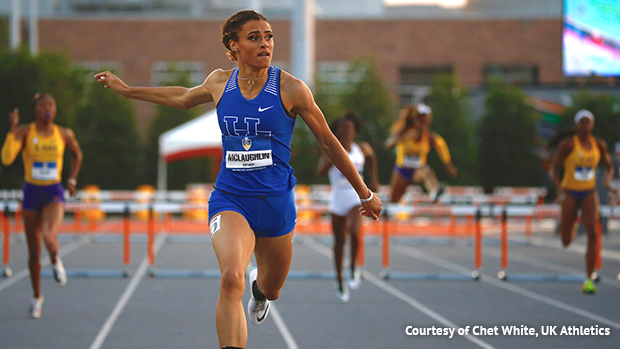 New Jersey legend Sydney McLaughlin, who turned pro after one of the greatest one and done seasons in NCAA Track and Field history at the University of Kentucky, has signed with talent agency WME (William Morris Endeavor), according to a report in Sports Business Daily.

McLaughlin, who will turn 19 on Aug. 7, hasn't signed with a shoe or apparel company yet. Although she will forego her remaining three years of eligibility at Kentucky, she's enrolled as a student at Kentucky for the upcoming fall semester.

McLaughlin, who graduated from Union Catholic High School in 2017, became the youngest U.S. track and field athlete to compete in the Olympics in 44 years when she advanced to the semifinals of the 400 hurdles in Rio in 2016 when she was just 17 years old.

After compiling one of the greatest high school careers in U.S. history at Union Catholic, McLaughlin turned in one of the most remarkable campaigns by a first-year athlete in NCAA history for the Wildcats.

At the NCAA Championships on June 9th at Hayward Field in Oregon, McLaughlin won the women's 400 hurdles in 53.96 and followed that up about an hour later by splitting 50.03 on the fourth place 4x400 relay to help the Wildcats place fourth in the final team standings.

After the NCAA Championships last month, McLaughlin announced her intention to turn pro. McLaughlin hasn't made her pro debut yet. She was scheduled to make it at the U.S. Track and Field Championships at Drake University (June 21-24), but she scratched from the flat 400 due to hamstring tightness.

McLaughlin's freshman year at Kentucky was so spectacular that she's been selected as one of three finalists for The Bowerman, college track & field's highest award. McLaughlin is the first female freshman finalist in the 10-year history of The Bowerman.