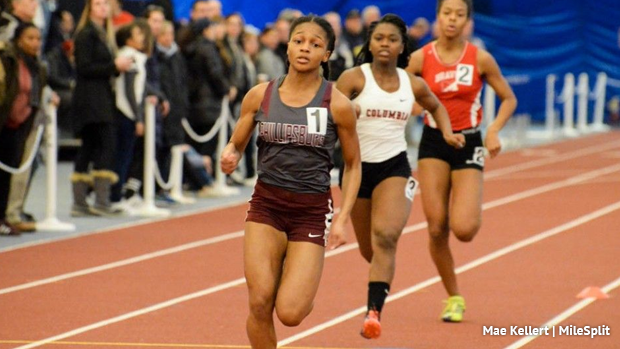 It took a time of 6.99 for the now graduated Bria Mack to win last year at MOCs. Sydney Hawkins is the only girl on this performance list who has dipped under the 7.0 barrier before with her 2017 sophomore time of 6.98. So far in 2018 Hawkins' best is a NJ#1 7.03 from this past Tuesday at Eastern States.

The Phillipsburg junior Hawkins comes in as the strong favorite this time round, she was third in last year's MOCs final and won the Group 4 state title last weekend with a 7.15 final and 7.10 prelim. We were denied a showdown between her and Sterling's Aliya Harrison who clocked a 7.07 to break the Group 2 meet record in prelims before an unfortunate false start in the finals. Expect Harrison to do well in the 200m showcase.

Dennisha Page of Woodrow Wilson who won Group 2 with a 7.20 is the second seed and could use another PR this week to have a chance at the title. Her best is a 7.16 NJ#4 time from Easterns this week, the junior has dropped a ridiculous amount off her 55 this season which started with a PR of 7.49.

If the cards fall right and untapped peak performance emerges could we see a freshman champ as well? Two are listed in the top four out of Groups, Lauren Princz of Egg Harbor Twp and Jailya Ash of Eastern Reg were second and third to Hawkins in Group 4 on Saturday. Princz is currently NJ#3 with a 7.09 to her name thanks to a huge PR at Eastern States for third. She was .06 behind Hawkins' second place 7.03 while competing head to head in that final. 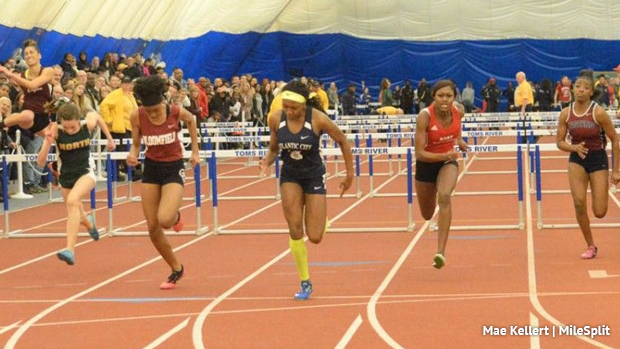 Two athletes have really stepped up their game heading into the biggest in state meet of the year. That would be Atlantic City's Claudine Smith and Paramus Catholic's Isabelle Dely. Both juniors and both clocking in amazing personal bests at Eastern States this week running under 8.10 for the first time. Smith tied for NJ#1 winning Easterns with an 8.05, dropping .12 off her prior best. Dely was fifth in finals but ran a toasty 8.08 NJ#3 in the semis. These two girls have definitely made a case for themselves.

But hold the phones, this is not a sure thing. Reanda Richards of West Essex will have a presence, she's a talented senior with a PR of 8.17. Tionna Tobias of Winslow posted an 8.20 at Easterns while also winning the long jump. Grace O'Shea of Ramapo showed signs of PRs to come placing second at Easterns with an 8.19, her previous best an 8.30 at Groups. Should be a fun event with plenty of athletes looking to run their fastest times of the year on Saturday. 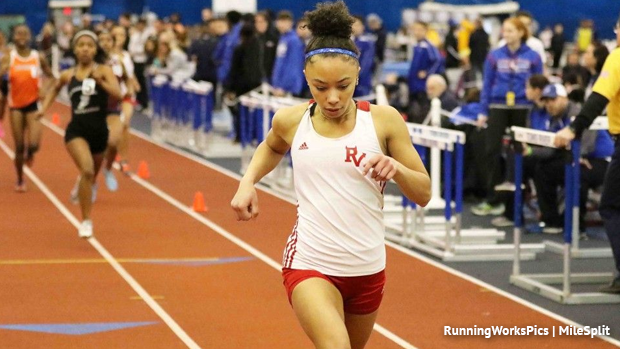 The defending champion is back with Aliyah Taylor of Rancocas Valley ranked NJ#9 on the season at 25.73, she stated in her college commitment interview she could be going for that double gold at MOCs. She set the meet record of 24.94 last year. There is definitely some tough competition in her way for the repeat though.

Two time outdoor 200m Meet of Champions winner Shakira Dancy of Winslow is entered and she posted a 24.63 NJ#1 at Easterns this week, she also owns the fastest time at the Bubble this season with her 25.25 from SJTCA #4 back in January.

With Aliya Harrison out of the 55 dash the talented Sterling senior will have her attention locked on the 200m, she's ran 25.10 this season. Of course the top seed at the time entries closed Shanelle Colmon of East Brunswick deserves a mention here, she has only run the event once indoors and it was a solid 25.04 in early February, possible untapped potential there. 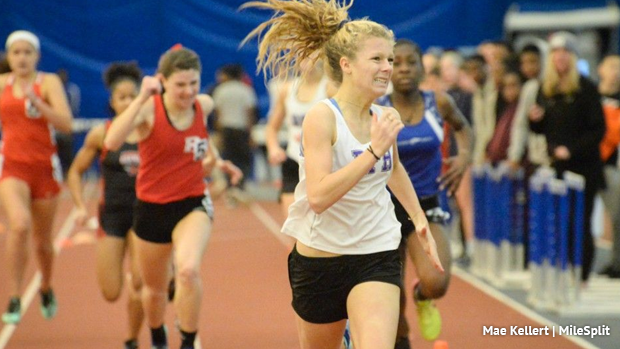 Who will be the first 400m indoor Meet of Champions winner not named Sydney McLaughlin or Olivia Baker since 2010? Baker won the event from 2011 through 2014 and then McLaughlin 2015 through 2017.

Well that question has become a whole lot more interesting with the emergence of Rumson-Fair Haven sophomore Lily Orr who led Groups weekend with her 57.29 to win Group 2. As well as Kaira Brown of Kent Place School, who ran 57.34 to win the Non-Public A title, ranked NJ#3 at 56.82 this season. Brown was fifth last year at MOCs as a sophomore.

Or for that matter Ajae Alvarez of Egg Harbor Twp, she broke 58 seconds for the first time on Tuesday to win Eastern States with a NJ#2 time of 56.78. Talk about timely peaking.

And we still have the preseason favorite Aliyah Taylor, who was second to only the Olympian Sydney McLaughlin last year as a junior and third at this meet her sophomore year. She has a NJ#4 56.95 to her name and the fastest time at the Bubble out of this bunch with her 57.24 from Sectionals.

Already getting crowded up front huh? Haven't even mentioned Flora Ahiarakwe of Winslow, or Pennsauken's freshman standout Jade Pope. Should be a great race, don't miss this one.