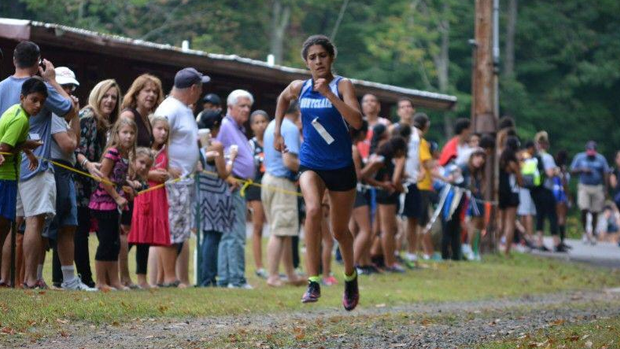 Juliet Kohli ran the fastest 5K of the weekend leading Montclair to a team title at the Seaosn Opener. | Photo by Amy O'Hara for MileSplit

On Saturday 1,269 athletes competed at the Season Opener Invitational at Darlington Park in Mahwah. NJ MileSplit had photographer Amy O'Hara on site, photos linked below.

Indian Hills Comes Out of Varsity B with Best Performance of the Meet!

Competing in the Varsity B the Indian Hills boys had the best team performance of the meet. Averaging 17:02, led by senior Matt Cohane, Indian Hills scored 1+2+4+15+16. Matt Cohane and Derek Barney's times of 16:06 and 16:08 were 1-2 the fastest times of the meet! In fact their top four finished top 10 in the merge. Speaking of the merge their team performance was even better as sophomores Steven Fiumefreddo and Chris Leymeister ran top five team times when added to the list!

The second best team performance was put forth by Ridgewood who won the Varsity A race out scoring Hackensack 42 to 54. Ridgewood split a mere 30 seconds between their top five in that race. Billy Byrne was 4th with 16:57, Brad Rynkowski 6th 17:05, Jonah Naftzger 7th 17:10, Brendan Hughes 9th 17:18, and Matteo Robazza 5th 17:27. When you look at the merge they were even better with sophomores Sid Wagh and Ben Zamboldi who ran 17:10 and 17:11 respectively in the sophomore division of the meet.

Juliet Kohli and Montclair Fly into First to Open Their Season

The second best team performance at the meet was run by Northern Highlands who went head to head with Northern Valley Old Tappan in the Varsity B race. Take a look at these scores:

Northern Highlands' 1-2 attack was fielded by sophomore twins Monica and Isabel Hebner who ran 19:16 and 19:37 respectively. Third place in that race was Old Tappan's senior Courtney Brunet who ran 19:55. All three teams were close in the merge as well.