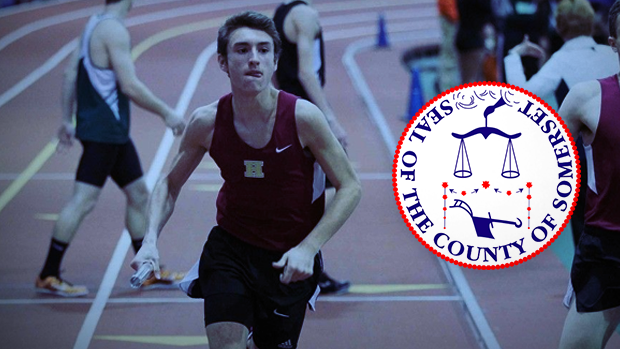 Brandon Tubby had a double gold meet on Tuesday. Original Photo by RunningWorksPics

Julia Dannenbaum of The Pingry School set the Somerset County meet record on Tuesday night when she cleared 11-09! That improves upon her NJ#1 spot and moves her up to US#13. Pingry went first and second in the event with senior Sophia Cortazzo vaulting 11-00 NJ#2 behind her teammate.

Sophie Spring of Ridge ran NJ#4 in the 3200m with a time of 11:22.86. This was just part of the impressive team performance by Ridge which won the team championship with 90 points.

Their team victory came with top six finishes by an abundance of athletes, top three in the 1600m, a first place finish in the 4x400m running 4:15.44, and a NJ#2 tying 5-4 high jump clearance by Jessica Creedon among the many highlights. You can view all the Ridge specific performances from the meet here via their MileSplit team page.

Also tying NJ#2 in the high jump was the Somerset County high jump champion Selena Thorne of Franklin at 5-04. Last year she jumped to 5-2 at this same meet, a sign of good things to come with that year to year improvement.

On the boys side Montgomery took the team title with 79.5 points. Their sprints squad came up big with a third through fifth place finish in the 55 meter dash as well as a first place finish in the 4x400m running 3:34.67. Patrick Warren brought the team gold in the high jump with a 6-00 clearance. Ajay Sarathy also brought a significant amount of points over from his 3200 meter victory at 9:49.88 and a second place finish in the 1600 meter with 4:34.39.