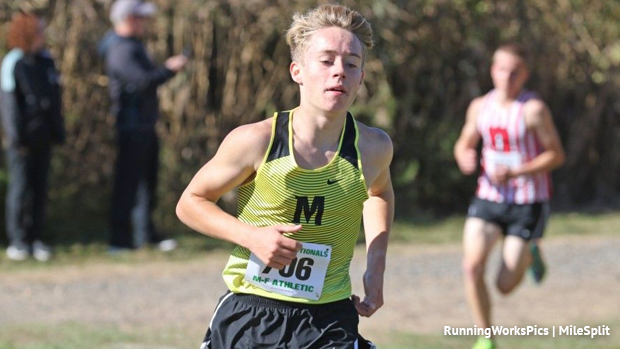 In this article we focus in on who the leading class of 2026 performers were this past cross country season during the NJSIAA State Championship series and Holmdel Park overall.

Links to the full freshmen rankings and athlete pages provided below.

After all was said and done Peter Simpson of Moorestown recorded the fastest time at Holmdel Park for all freshmen with his 17:14 during Group 3 Championships finishing 25th. This was following a ninth place run at South Sectionals to advance as an individual regardless of Moorestown also moving on as the fifth place squad.

Only seven other freshmen ran under 18 minutes at Holmdel Park this season. THREE were from the same team! Clay Stevens of Manalapan ran 17:20, Ryan Gibson of Haddonfield Memorial 17:30, Brody Watt of Bernards 17:31, and then three Voorhees teammates Austin Fritz 17:38, Anthony Giello 17:48, and Benjamin Damiano 17:59.

Of those listed only one competed the following weekend at the Meet of Champions, Ryan Gibson moved on by way of team advancement along with three frosh.

At MOCs Haddonfield's Gibson ran to 17:42, Ryan Schmidt of North Hunterdon 18:20, and Chatham's Patrick Roskell and Marcus Valenzuela 18:37 and 18:55 respectively.

The North 1 location's fastest frosh was Aaryan Pethe of Morris Knolls with a 17:50 at Garrett Mountain.

North 2 at Oak Ridge Park saw Brody Watt of Bernards lead the way with a 16:41 for fifth in his race.

Central had Clay Stevens of Manalapan way ahead of his peers at 16:46 on Thompson Park's layout.

The South Sectional freshmen lead was a bit closer but led by the above mentioned Peter Simpson of Moorestown at 16:10 just ahead of Matthew Littlehales of Delsea with 16:12 at DREAM Park. The quickest freshmen girls time at Holmdel Park this season was performed by Toms River North's Jessica Abbott. The young star ran a 19:10 during the October 1st New Balance Shore Coaches Invitational and when merged was listed as the 10th fastest time of the meet.

22 freshmen girls crossed the finish line at Meet of Champions this season which is about the norm. They were led by two who ran under the 20 minute mark, Riley Austin of Haddonfield Memorial with a 19:45 and Ivy Slavinski of Pt. Pleasant Boro 19:52.

Kate Shaw of Mendham 20:09, Emmy O'Hearn of Union Catholic 20:18, and Blythe Dudley of Villa Walsh Academy 20:22 closing out the top five ranked frosh finishers from the Meet of Champs.

North 1 Sectionals held at Garret Mountain saw Sadie Meloro of Northern Highlands lead all freshmen at the meet with her 20:25 for ninth in her race. Nicole Molter of Mount Olive, 20:32, and Keili Semler of Randolph, 20:58, the only other two to run under 21 minutes.

North 2 at Oak Ridge Park had Kate Shaw of Mendham lead the freshmen performances with her 19:09 to run second in North 2 Group 3. This was also the fifth fastest time of the meet combined. Voorhees' Daphne Roskowski, 19:42, Tarikwa Dunn of Weehawken 19:53, and Hunterdon Central's Molly Domurat, 19:54, were the only other three to run under 20 minutes from the class of 2026.

Central Sectionals at Thompson Park saw two girls previously mentioned above lead the way. Ivy Slavinski of Pt. Boro and Allison Lee of WWPNorth ran 19:39 and 19:40. Slavinski was third in her Group 2 Section and Lee fourth in her Group 3 race.

At South Sectionals on the DREAM Park course Jessica Abbott, who also led all freshmen this season at Holmdel Park, clocked an 18:04 to win the South Group 4 title and was second overall in the course merge only behind Clearview senior Abigail Waddington's 18:02. Haddonfield's Riley Austin also had a great run at this meet with an 18:23 as part of that perfect team score, she finished third as an individual in the South Group 2.