Angelina Perez completed the triple crown by capturing the only missing jewel in her legendary career, Christiana Nwachuku pulled off a rare double, and Jada Mia Puryear, Niki Woods, and Celine-Jada Brown produced some of the greatest performances in state history at a very windy 53rd NJSIAA Meet of Champions at Franklin High School in Somerset.

Although the meet was missing several elite athletes who were competing at National Championship meet, and the gusty winds hurt many times, there were still plenty of memorable moments.

Let's start out with Perez.

Before last night, Perez, the distance running dynamo from Lakeland ,had won just about ever big title possible except for a national title and an outdoor M of C title. But in a span of just over 18 hours, she changed that by winning the 2-mile at the New Balance National Championships in 10:03. on Friday night at Franklin Field in Philadelphia, and in the final race of her high school career, she finished off the two-state distance double by winning the 3,200 at the M of C in 10:29.

Saturday's victory also completed the triple crown for Perez - Meet of Champions titles in cross-country, indoors and outdoors in the same school year!

"It was a tough double running last night and today, but I just had to finish my career with a national title and get my first outdoor title at the Meet of Champions,'' said Perez, who finished third at the M of C in the 3,200 last year when she was caught right at the line. "After I won last night, all I thought about was how I just have to win the 3,200 today. I kept thinking about last year when I came up short, and there was no way I was going to let that happen again.  I didn't really care about the time today, and it was too windy to run fast anyway. All that mattered today was winning my final high school race to out on top.''

Perez finished her career with four M of C titles (1 in XC, 2 indoors and 1 outdoors),  she broke the state two-mile record indoors and outdoors, and she ran 17:07 at Holmdel Park, the fastest time ever by a NJ girl on the course.

So is Perez, who received a huge ovation from the crowd as she came down the final homestretch, the greatest female distance runner in NJ history?

She'd rather let others decide that, but she did say how she'd like to be remembered.

"I want my legacy to be that I was someone who only started running as a sophomore and I just kept working hard to be the best I could be, and that I gave it my all every time I raced,'' said the University of Florida-bound Perez. 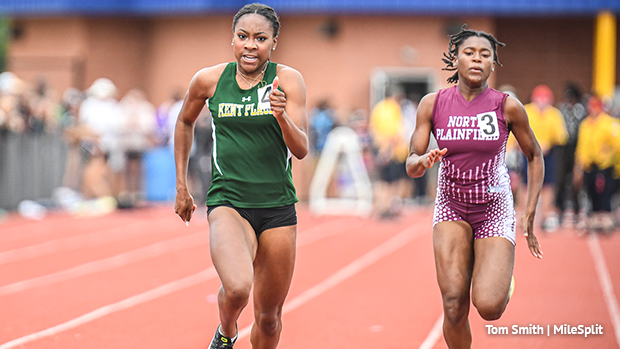 Christiana Nwachuku, a senior at Kent Place, was one of the biggest stars of the meet.

"To do something that only Olivia Baker has done really means a lot because she's one of the best ever,'' said Nwachuku, who won the 55 dash at the indoor Meet of Champions in March. "I came here not really knowing which events I'd run, but I decided to run them all because I didn't want to ever look back and wonder what if. I'm glad I ran all three races and was able to finish my high school career with two big wins. This is something I';; never forget.''

All season long, Celine-Jada Brown of Plainfield felt it was just a matter before she hit 20 feet in the long jump.

That time finally came on Saturday when the Rutgers-bound Brown soared 20-0.50 to capture her second straight tile and become just the sixth girl in state history to reach 20 feet outdoors. Brown, whose previous best was 19-11.50, is also just the fourth girl to reach 20 feet in meet history, and is the seventh girl to ever win two-straight titles.

"It feels so good to finally get 20,'' said Brown. "I knew I had it in me, and it finally happened. It was just a matter of believing in myself and executing. "Now I'm hoping to get 21 feet and maybe get the win at the New Balance Nationals.''

ALL IN THE FAMILY

When sophomore Emma Zawatski of Freehold Township used a big kick to stun the field to win the 1,600 with a PR of 4:48.88, she completed a rare family double as she joined her brother, Tyler, as a Meet of Champions winner. Tyler won the javelin title as a junior last year, but couldn't defend it on Saturday because of an injured hand.

The Zawatski siblings are just the second brother-sister combo to ever win outdoor Meet of Champions titles. Ray Wilks and Helen Wilks of Bridgeton pulled it off in 1994 when Helen won the 100 hurdles, and Ray won the first of his two shot put titles.

Right after she crossed the line, Zawatski threw her hands in the air in disbelief over what she just did.

"I literally have dreamed about this moment,'' said Zawatski. "It still doesn't feel real to me. To be told that I won the Meet of Champions is just crazy. This is such an unbelievable feeling right now.'' Niki Woods and Casey Sullivan once again showed why they will go down as one of the best 1-2 throwing tandems in state history when the teammates at Demarest repeated as champions.

The University of Princeton-bound Woods, unloaded a bomb of 150-10, No. 4 in meet history and No. 9 in state history, to capture the javelin for the second straight year.

Sullivan, who is headed to Wake Forest, made it two straight titles in the shot put with a throw of 42-2, and she broke the Bergen County record in the discus with a throw of 144-0 to place second.

Woods and Sullivan will be back in action at the New Balance Nationals on Sunday. Jada Mia Puryear of Union Catholic completed a remarkable two-day stretch when she unloaded a massive throw in the discus as she sent the saucer flying 155-7 to smash her own Union County record and move into No. 6 on the state's all-time list.

On Friday, Puryear earned All-American in the discus when she placed sixth in the discus at the New Balance Nationals with a throw of 149-4.

"Hitting 150 feet has been my goal since last year, and after the 149 yesterday, I had a good feeling I could get it today,'' said the Columbia-bound Puryear. "To throw as far as I did and be up there with some of the best ever in the state means a lot to me. I've worked really hard for this, and it's the perfect way to finish my career.''

BIG KICK WINS IT FOR ALLEN

Christina Allen of River Dell, in about sixth place at the bell, knew she had make a move to get in better position if she wanted to win the pack in the 800.

With 300 to go, the sophomore star pulled the trigger and blasted her way to the front as she battled through the stiff headwind.Allen kept pouring it on and refused to let anyone catch her as she powered her way to the line, stopping the clock a 2:11.07 to break her own school record. Allen split 65.47/65.60.

"I decided to change it up a little this year and focus more on different races, and it worked out better than imagined,'' said Allen. "To be only the second one to win the 3,200 and 800 is pretty cool.''

Every season there are athletes that seemingly come out of nowhere and take the state by storm. Alexandra Bonn, a junior at Union Catholic, completed the indoor/outdoor M of C sweep in the triple jump. And she had to do it in comeback fashion. Bonn, one of the last qualifiers to make the final, put it all together in the finals and exploded for a 38-6.75 to get the win.

Junior Shea Burke ran a PR and NJ No. 4 time of 14.36 to win the 100 hurdles and become the first girl from her school to ever win a M of C title on the track.

Samantha Strydesky, a junior at Howell, became the third girls champ and fourth overall from her school when she cleared 5-8 win on misses over Jordan Robinson of Morristown. Strydesky, who equaled her PR her NJ. No.  1 mark this season, joined Larry Cornelius (discus in 1994),  Lindsey Gallo (1600 in 1998), and Rachel Kern (javelin in 2017) as M of C winners from Howell.

Junior Emma Keating of Pompton Lakes became the first champ from her school when she won the pole vault on misses after she and Elizabeth Fitzgerald of Montclair each cleared 12-0. 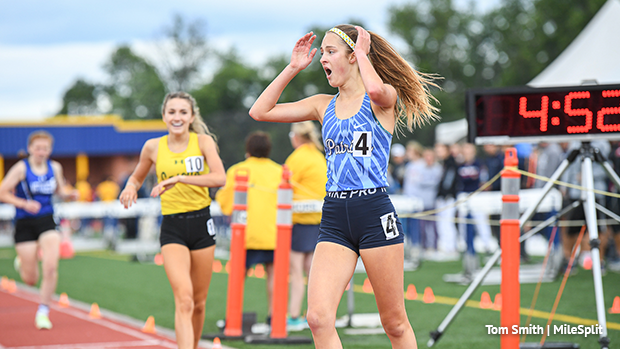