Union Catholic extended one long streak and ended another when the Vikings pulled off an impressive sweep, Brian Theobald was a triple-winner to fuel St. Rose to a team title, and the Morris Catholic girls overcame an amazing performance by Tilly O'Connor to win their third straight title at Friday's NJSIAA Non-Public A and B Championships on Friday at the Bennett Center in Toms River.

In the A Division, the UC girls simply overpowered the competition, and reaffirmed their status as the top team in the state by scoring in all nine events and ringing up a meet-record 109 points to runaway with their seventh straight title. Kent Place was second with 40. UC broke the girls' overall meet record (all groups combined) for points scored of 105 that UC set in 2015

The seven championships by the UC girls ties them with Bernards for the fourth most in state history for a girls program. Columbia and Winslow share the state record with 10 titles each, and Haddonfield has captured nine.

On the boys side, Union Catholic won its first A Division title ever by snapping Christian Brothers Academy's run of 10 straight titles with an 87-65 victory over runner-up CBA. UC won its previous two championships in the B Division in 2012 and '13.

Let's look at how the UC girls racked up their record 109 points.

For the UC boys, seniors Nick Givan, Shane Brosnan, and Myles Plummer led the charge for the Vikings. 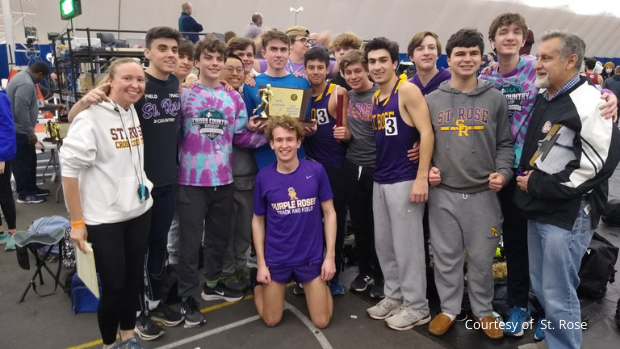 Brian Theobald pulled off a great distance triple, and Simon Advento was a double-winner to lead the St. Rose boys to a

67-41 victory over runner-up Bishop Eustace in the boys B Division.

It's first outright for title for the St. Rose boys and second championship overall. St. Rose shared the title with Bishop Eustace in 2010. The Veivia sisters, Lisa and Kate, Vonya Gould, and Anna Giannotti also came up big for the Crusaders.

Five meets records went down in a meet that featured many of the state's biggest stars.

Christiana Nwachuku of Kent Place, the state leader in the 55 dash, won that race in the A Division in a meet record 7.13, and finished first in the 400 in 57.54. The UPenn-bound Nwachuku, who has run a state-best 7.10 this season, broke the record of 7.19 set in 2019 by Sydney Tucker of Union Catholic.

Kent Place junior Lindsay Hausman broke the meet record in the 3,200 with her winning time of 10:45.25, which is the third fastest time in the state this season. The former record of 10:47.24 was set in 2013 by Courtney Thompson of St. John Vianney.

In a clash between two of state's best in the 55 dash, Fabian France of Bergen Catholic won the A race with a NJ No. 3 and meet record 6.39, edging Fitzroy Ledgister of St. Peter's Prep, second in 6.43. Both sprinters went under the meet record of 6.45 set in 2018 by Antonio Tarantino of Paul VI.

Joe Licata of Gill-St. Bernard's improved his PR and state lead in the shot put by winning the B Division with a meet-record throw of 63-8. He broke the former record of 63-4 that was set by his brother CJ in 2018.

Senior Selah Dungey of Newark Academy cleared a meet record and PR of 5-5, which is tied for No. 3 in the state this season, to win the girls B Division high jump. That broke the record of 5-2 that she shared with five others. The University of Chicago-bound Dungey also won the high jump at the Non-Public B State Indoor championships as a sophomore in 2020, and she has won two Non-Public B State titles outdoors in the high jump (2019 and 2021).