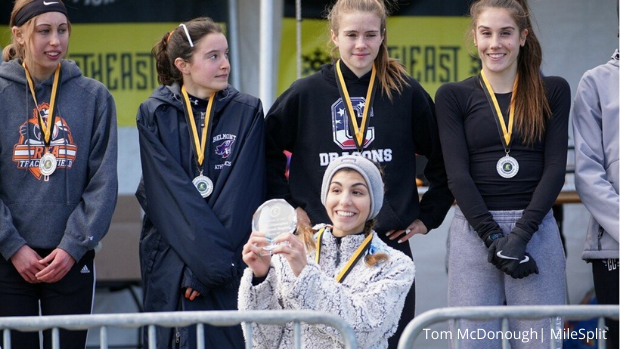 Angelina Perez of Lakeland and Marco Langon of Bridgewater-Raritan, who have put together two of the greatest cross-country seasons in state history, added to their remarkable legacies by throwing down two of most jaw-dropping performances in N.J. history when they led a strong showing by the Garden State at Saturday's Eastbay Regional Championships at Van Cortlandt Park in the Bronx.

NJ's Perez, Langon, Shane Brosnan of Union Catholic (fifth in the boys race), and Lilly Shapiro of Colts Neck (10th in the girls race) all qualified for the Eastbay (formerly Foot Locker) National Championships on Dec. 11 at Balboa Park in San Diego. The top 10 finishers advanced.

The undefeated Perez, who is ranked No. 1 in the country by MileSplit and is coming off a victory at the N.J. Meet of Champions last Saturday, blew apart the race in the second mile and rolled to a 21 second win in 17:21.5,  No. 7 in course history and No. 2 all-time for a N.J. girls on the historic 3.1-mile layout.

The only N.J. girl to ever run faster at Vanny than Perez is the great Janet Smith of J.P. Stevens. Smith ran 17:08.1 when she won this race in 1983, and followed that up by winning the Foot Locker National Championship. The University of Florida-bound Perez has a great chance to become NJ's second girl to win the Kinney/Foot Locker/Eastbay national title.

Perez, whose epic season also includes a meet record at the Meet of Champions (17:09), the N.J. record and No. 2 all-time performance at Holmdel Park (17:07 at the State Group 2 Championships), and course records at Garret Mountain (16:54) and Darlington Park (16:44), is the fourth N.J. girl to win the NE Regional. Perez joined Smith ('83), Christi Constantin of Kittatinny (1988), and Alyssa Aldridge of Mainland (2016) as the only NJ girls to win the NE title.

The University of North Carolina-bound Shapiro, the State Group 3 champion who was second at the Meet of Champions to Perez, used d a big late kick to rally from 11th place to grab the 10th and final qualifying spot in the girls race as she stopped the clock at 18:08.6.

Charlotte Bednar of Lawrenceville, the only XC runner to defeat Perez in the past two years, was in the lead pack for the first 2K, but eventually dropped out of the race. The Notre Dame-bound Bednar, who defeated Perez to win the Holmdel Invit. last year in 17:21 (the NJ course record at Holmdel until Perez ran 17:07 this season) was running in just her second race of the season. Bednar, who set the state records in the 5K and 3,200 on the track last spring, finished 8th at the Nike Nationals XC Championships as a sophomore in 2019.

The boys race was an instant classic as the Villanova-bound Langon came up just short in an epic duel with with Gavin Sherry of Conrad High in Connecticut as the two studs produced the two fastest times in meet history and the fastest 1-2 finish in course history.

The Stanford-bound Sherry, ranked No. 3 nationally, stopped the clock at 15:05.8 to take down the meet and course records, and the previously unbeaten Langon, ranked No. 5 in the country, was second in 15:09.6, which smashed the N.J. course record and is tied for No. 3 all-time in the long history of Van Cortlandt.

Sherry, second in the NE Region and 14th at the National Championships as a sophomore in 2019, broke the course record of 15:08.0 that was set in 2003 by Josh McDougal of New York at the NYRR Club Championship, and took down the meet record of 15:09.6 set in 2007 by Olympian Donn Cabral of Glastonbury, Conn.

Langon's 15:09.6 ties Cabral for No. 3 all-time in course history, and it shattered the N.J. CR of 15:15.5 set by the legendary Craig Forys of Colts Neck when won this race in 2006. Forys went on to finish second at the Foot Locker Nationals that season.

No matter where he finishes at the National Championships, Langon's season will down as one of the very best in N.J. history.

In addition to his NJ record at Vanny, Langon's 15:06 to win the Meet of Champions placed him No. 3 all-time at Holmdel Park, and he took down course records this season at Oak Ridge Park (15:02) and at Phillipsburg (15:36).

The Harvard-bound Brosnan, ran a smart race, moving up into the top 10 in the second mile and then finishing with a flourish to take fifth in 15:24.9, which is tied for No. 10 all-time on N.J.'s Van Cortlandt list. Brosnan led NJ#1 Union Catholic to its first Meet of Champions title last week by placing third in 15:22. He also won the State Non-Public A title.

Georgetown-bound Jackson Barna of Ridge, who is ranked No. 16 nationally and was second at the NJ Meet of Champions in 15:13 (No. 4 all-time at Holmdel), didn't compete due to illness.