Here is your week three results board. With schools out for their winter breaks we have plenty of week day meets to go over this week. Below we'll place some quick top performance notes here and there, keep in mind anything written within this article is not a full recap so not everyone will be mentioned. If a full recap or other types over coverage are created they will be linked under the meet. 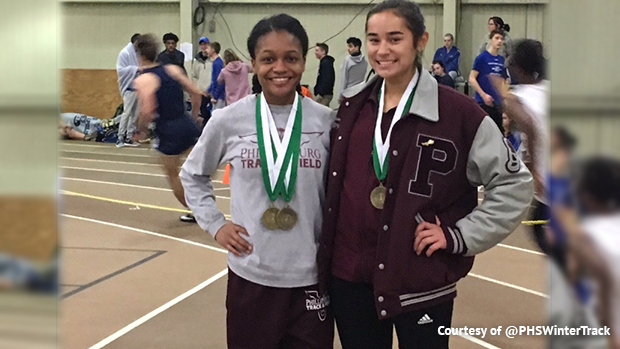 Sydney Hawkins of Phillipsburg had another great meet taking over NJ#1 in the 200m and winning the 60m dash as well with times of 25.50 and 7.70. More in the recap article as well race videos. 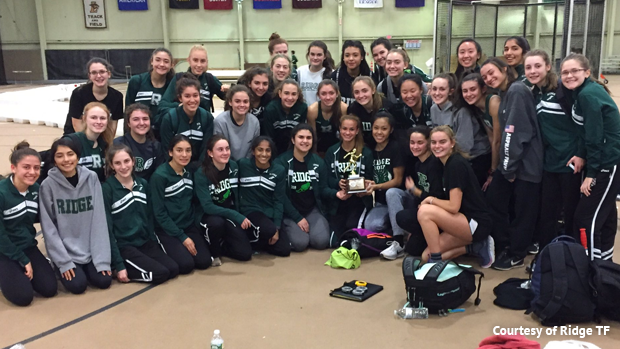 This one had many great performances and they came in bunches. During the 200m Dennisha Page, Jewel Ash, and Claire Pedrick all ran within .06 of each other and took over the NJ#3 through NJ#5 rankings. Page won running 26.02, Ash 26.06, and Pedrick 26.08!

In the 400m dash Jade Pope of Pennsauken and Claire Pedrick had another set of great times. Pope posted a 59.37 to rank NJ#4 this season and Pedirck's time of 59.85 moved her up to NJ#8.

Willingboro had a huge day in the high jump both boys and girls. On the girls side Kenady Wilson cleared 5-04 tied for NJ#4 so far. The boys saw teammates Kameron Smith and and Nate Robertson square off both finished with a height of 6-06 now ranked NJ#2 together, both a juniors.

Devin Anderson of Mainland Regional now ranked NJ#4 thanks to his 22.68 in the 200m.

Alijah Caul threw over 40-00 for the first time in the shot put, she's just the fifth girl to do so this season for New Jersey. She also broke a 36 year old school record with that mark!

Ridge girls posted a 4:23.63 SMR and now rank NJ#2 US#8 in the relay event. Their co-team champion competition Montgomery had a big day in the DMR running 12:45.65 to take over the state lead and rank US#6. Bradley Jelmert of Watchung Hills, a junior, vaulted a major PR of 15-0 to lead the meet and is now tied for NJ#2.

The first meet in the series history. Stephen Grant of North Brunswick now owns the young meet's boys record of 47-08.25 as the first winner. The girls winner was South Brunswick's Adwoa Ansong who threw 32-04.75 just .75 ahead of Nadja Ifill of North Brunswick in second at 32-04. 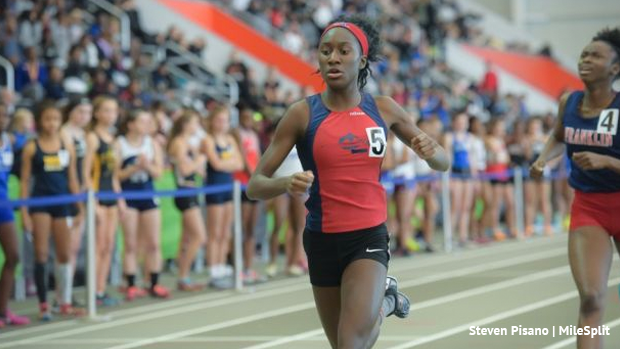 By Jim Lambert - Double winner Luis Peralta of Passaic, making his season debut, and Victoria Vanriele of Gov. Livingston both burned US#1 times in the 600-meter run, and Jenna Rogers of Rutherford cleared a NJ #1 and US#2 5-10 in the high jump at Ocean Breeze.

Rogers, a junior, tied the facility record with her 5-10 clearance to improve on her NJ #1 and US #2 performance.

Rogers, the state outdoor record holder in the high jump with the 6-0 3/4 she made as a freshman to win the 2017 New Balance National title, has a great shot this season at breaking the state indoor record of 6-0, which was set in 1985 by Tatiana Smolin of Randolph.

In a great showdown in the girls shuttle hurdles, Paramus Catholic finished first in a NJ#1 30.84 and Union Catholic was second in a NJ#2 31.64. The times were converted.

Tiffany Bautista of Paramus Catholic had a big day in the jumps as expected. 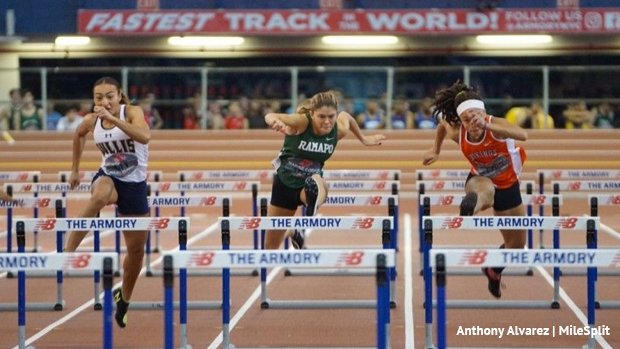 Grace O'Shea of Ramapo broke her own Bergen County record in the 55 hurdles by placing second in a NJ #1/US#2 7.99, the Union Catholic girls cranked out a pair of fast relays and Nils Wildberg of Princeton opened his season by winning the long jump with a NJ#1/US#4 23-4 1/2, and t the 168th Street Armory.

This meet was filled with NJ#1 performances.

The UPenn-bound O'Shea, the NJ Meet of Champions winner in the 55 hurdles last winter, broke the county record of 8.06 that she set when she placed sixth at the New Balance Nationals last March. O'Shea, who finished behind the US#1 7.95 by Christina Warren of Perkiomen Valley (PA),  moved into a tie for No. 12 on NJ all-time state list. O'Shea also ran a 25.6 200m leg on Ramapo's third-place SMR that ran a NJ#1 4:12.94. 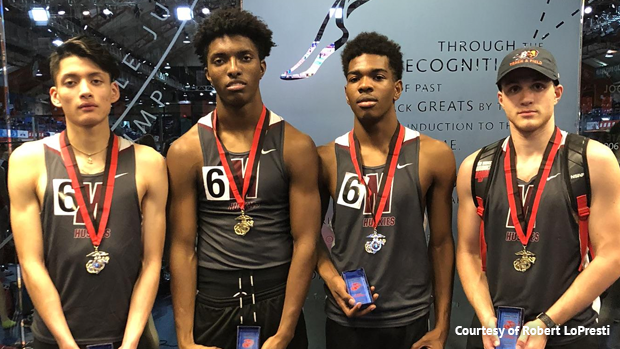 Matawan's sprint medley relay time of 3:36.61 shot them right up the rankings to US#1 and right behind them in second was South Brunswick running 3:37.93 for US#4. Just eight teams have gone under 3:40 so far this young season.

The Dartmouth-bound Wildberg, second in the LJ at the Meet of Champions last spring with a PR of 23-8 1/2, has a great shot of breaking the Mercer County indoor record of 23-10 set in 1985 by Matt Rose of Trenton. 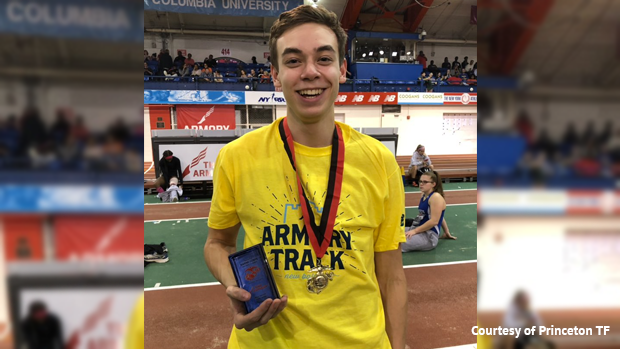 Liam Landau of Pascack Hills won the boys pole vault on misses at 15-0, tying him for NJ#2. Conor Reilly of Union Catholic, who has also gone 15-0 this season, was third at 14-6.

In the girls pole vault, Mue Carroll of Matawan and Hope Handlin of Union Catholic each cleared a NJ#2 11-0. Carroll placed fourth and Handlin sixth.