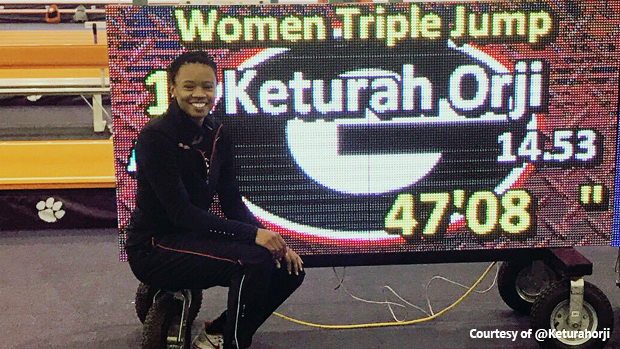 In a career filled with historic achievements, NJ legend Keturah Orji, the most decorated horizontal jumper in NCAA history, leaped into the history book once again on Thursday night when she was named the winner of the 2018 Female Bowerman, an award given to the most outstanding collegiate track & field athlete in the nation.

The Bowerman, track and field's equivalent of the Heisman Trophy, is named after former University of Oregon coach Bill Bowerman.

Orji, a 2014 graduate of NJ's Mount Olive High School and a 2018 graduate of the University of Georgia, is the first field event athlete to capture the Female Bowerman award since its inception in 2009. She's also the first female to be a Bowerman finalist three times.

Orji, a 2016 Olympian, is the first NJ native to win The Bowerman. She finished ahead of the other two finalists, fellow NJ All-Time great Sydney McLaughlin, and Maggie Ewen of Arizona State.

Cheserek, who starred at St. Benedict's Prep in Newark, NJ., won a record 17 NCAA titles in the three seasons combined during his years at Oregon. But despite being arguably the most dominant NCAA distance runner of all-time, Cheserek somehow never won The Bowerman.

The 22 year-old Orji, named the NCAA's 2018 Woman of the Year, put the finishing touches on remarkable career this past year when she swept the NCAA outdoor triple and long jump titles, making her only the third in meet history to do so and tying her as the meet's top scorer. She led Georgia to a national runner-up finish to USC by one point. Orji also became the first to ever win four NCAA outdoor triple jump titles, and is the fifth in meet history to sweep a single event during a career. She is also third athlete in meet history to win five individual events at the NCAA Outdoor Championships.

Orji, fourth in the TJ at the 2016 Olympic Games in Rio, owns the top six outdoor triple jump marks in collegiate history, including three from 2018. She finished her career 31-1 in indoor/outdoor collegiate triple jump competitions, finishing only as a runner-up at the 2015 NCAA indoor meet as a freshman. Orji also won her fourth SEC outdoor triple jump title to become the first competitor in conference history to win the same event four times both indoors and outdoors. 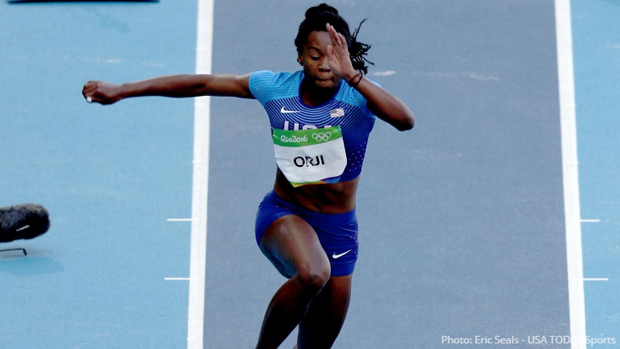 Indoors in 2018, Orji earned the SEC Scholar-Athlete of the Year and Women's Field Athlete of the Year and was the USTFCCCA South Region/National Women's Field Athlete of the Year. She owns the top eight indoor triple jump marks in collegiate history, including five in 2018.  At the 2018 NCAA Indoor Championships, Orji won her fourth straight NCAA indoor triple jump title and finished second in the long jump to help Georgia capture its first NCAA title. She also set an indoor American/collegiate record of 47-8 in to win the Clemson Invitational.

Prior to her record breaking college career, Orji put together the greatest career by a horizontal jumper in NJ high school history during her days at Mount Olive. She won six national titles in high school, captured the 2014 USATF Junior National title in the TJ, and she holds the state records in the triple jump indoors and outdoors.

Orji now competes professionally for the Atlanta Track Club, where she is focusing on qualifying for 2019 World Championships and the 2020 Olympic Games in Tokyo.

She holds the American and collegiate records for the indoor triple jump and the collegiate record for the outdoor triple jump. Orji was a four-time USTFCCCA Division I Women's Field Athlete of the Year, and she is the only woman in history to be a three-time finalist for The Bowerman award. She is now pursuing a graduate degree at Georgia and is a volunteer assistant with the Bulldog track and field program.

McLaughlin, after compiling one of the greatest high school careers in U.S. history at Union Catholic that was highlighted by competing at the Olympic Games in Rio in the 400 hurdles at the age of 17, turned in one of the most remarkable campaigns by a first-year athlete in NCAA history at Kentucky.

McLaughlin, the first female freshman finalist in the 10-year history of The Bowerman, won the women's 400 hurdles at the NCAA Championships in 53.96, and followed that up about an hour later by splitting 50.03 on the fourth place 4x400 relay to help the Wildcats place fourth in the final team standings.

After the NCAA Championships, McLaughlin announced her intention to turn pro. The 19-year-old McLaughlin signed with New Balance in October and will be coached by Olympic gold medalist Joanna Hayes.