Princeton was trailing East Orange, 76-67, with one event left. But Varun Narayan and Nils Wildberg each leaped 22-7 1/2 to place 2-3 for 14 points to give the Tigers a dramatic 81-76 victory. It's the first title for Princeton since winning Group 3 and its 10th overall.

Helsop was the biggest star of the entire state this weekend.

The Texas A&M-bound Mirabelli not only won the javelin for the second straight year, but his 218-11 broke the overall meet record (all Groups combined) of 216-11 set in 2014 by state record holder Curtis Thompson of Florence. Mirabelli, the state season leader with a 220-10, is chasing Thompson's state record of 224-10.

This was all about Delsea as the Crusaders rolled to its first state title, which was highlighted by a state record performance from Khaliel Burnett.

Burnett also placed third in the long jump with a 23-0 as Delsea racked up 49 points in the field and  outscored a very strong West Windsor-Plainsboro North team, 65-46.

One of the biggest highlights of the whole weekend was the baton battle between Deptford and Bridgeton in the 4x100. When the smoke cleared, Deptford won the race in a NJ #1 41.72 and Bridgeton was second in a NJ #2 42.05. 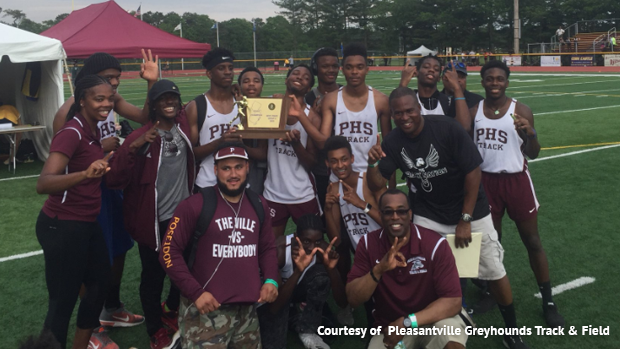 Pleasantville outscored West Side, 50-37, as the Greyhounds won its third title overall. Pleasantville also won Group 2 in 1996 and '99.

Sahmir Jones won the 100 and 400 and was second in the 200 for Pleasantville, which also picked up a second in the 400 hurdles and a fourth in the 800 from Quentin Bundy.

One of the top performances in the state this season was turned in by Liam Landau, a junior at Pascack Hills, who cleared a Group 2 record, county record and NJ #1 15-7 1/2 to win the pole vault.

When the final team scores were announced, the football field at Franklin High School turned into a gymnastics tumbling mat and a dance floor as Shabazz athletes and head coach Damon Harrison started doing back-flips and broke out some dance moves.

The Bulldogs also dumped two Gatorade jugs of water on Harrison as they celebrated its first ever state title.

Shabazz won the championship with 41 points. Metuchen, Buena and Cresskill also finished tied for second with 28.

Drew Maher of Shore Regional was the biggest individual star in the distance races in the Group 1 competition.

There are some things in New Jersey track and field that are just inevitable. One of those is that Christian Brothers Academy and Union Catholic will throw everything they have at each other to win this title.

And that's what happened again this weekend when the two parochial powerhouses went back and forth in a great slugfest that wasn't decided until the very end.

It's the third straight title for CBA and it gave the Colts a state record 22 state titles and a state record total of 100 state championships in all three seasons combined! 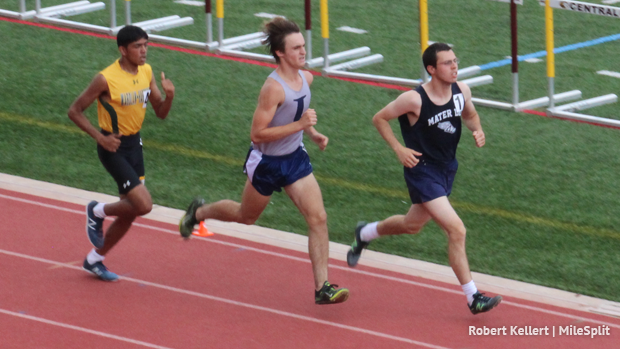 Mater Dei also picked up a win from its 4x800 team, and Isaiah McClain had a huge meet. McClain won high jump, and was third in both the long jump and 100 dash for Mater Dei.