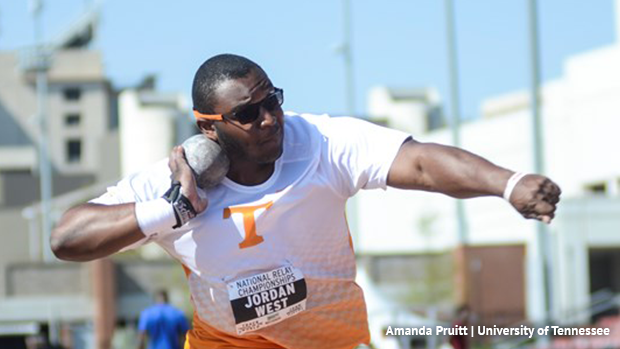 Sydney McLaughlin made her long anticipated college debut in the 400 hurdles at the National Relays this past Friday in Fayetteville, Ark., and she did what she seemingly always does-she smashed a record.

The freshman at Kentucky out of Union Catholic High School blasted a 53.60 to break her own World Junior record and take over the world lead in the 400 hurdles this season.

A pair of NJ throwing studs rewrote the record books and dominated the shot put at the National Relays.

Michigan sophomore Andrew Liskowitz (Christian Brothers Academy) finished first with a school record 66-6 ½ to earn Big Ten Field Event Athlete of the Week. Liskowitz's 66-6 1/2 broke the Wolverines school record of 63-7 ½ set in 2015 by Cody Riffle and is No. 3 in the NCAA rankings this season.

And Tennessee freshman Jordan West (Rahway High School) continued his remarkable rookie season by smashing the Vols school record with a heave of 64-7 ¾ to place second to Liskowitz. West's 64-7 3/4 broke Chuck Locke's Tennessee record of 64-1 that stood since 1982, and moves West up to No. 10 on the NCAA list for this season.

In a battle between the two fastest 400 hurdlers in NJ high school history, Florida freshman Cory Poole (East Orange High) finished fourth and Michigan junior Taylor McLaughlin (Union Catholic) was sixth in a season best 50.76 at the National Relays. Poole, who broke McLaughlin's NJ high school record in the 400 hurdles last year, is No. 10 in the NCAA rankings with the 50.35 he ran at the Florida Relays. McLaughlin's 50.76 places him 14th.

Rider senior Sara Gardner (Delaware Valley) was named the Metro Atlantic Athletic Conference (MAAC) Women's Track Performer of the Week this week for the second time this season. Gardner earned the honor after breaking Rider's school record in the 100 hurdles with her sixth place finish in an ECAC qualifying time of 13.51. Gardner transferred to Rider from Mount St. Mary in 2015. At Mount St. Mary, Gardner was named the Northeast Rookie of the Meet at the 2015 NEC Championships when she won the 100 hurdles in a school record 13.93.

Villanova senior Ben Malone (Pascack Valley) helped the Wildcats pick up a pair of Championship of America titles at Penn. He ran 2:58.4 leading off the winning DMR, and split 4:04.6 in the 4xmile C of A.

George Kelly of Adams State (Christian Brothers) ran a 4:03.0 third leg in the 4xmile Championships of American to give his team the lead at the Penn Relays. Adams State wound up fifth.

Look out for Rutgers!!

With three NJ guys in its lineup, freshman Taj Burgess (Carteret High), and Boaz Madeus and Jermaine Griffith, former teammates at Nottingham High, the Scarlet Knights finished fourth in the 4x400 Championship of America race in 3:04.67, No. 13 in the NCAA rankings, at the Penn Relays. Griffith went 47.4, Madeus 46.5, and Burgess anchored in 44.82.

Duke junior Domonique Panton (Freehold Township) soared 42-2 to place in the triple jump at the Virginia Grand Prix meet in Charlottesville to smash the Blue Devils record of 41-5 ¾ that was set in 2001 by Jodi Schlesinger. Panton's 42-2 places her No. 36 in the NCAA rankings. Georgia senior Keturah Orji (Mount Olive) continues to lead the NCAA with her 47-0 ¼ at Mt. SAC Relays 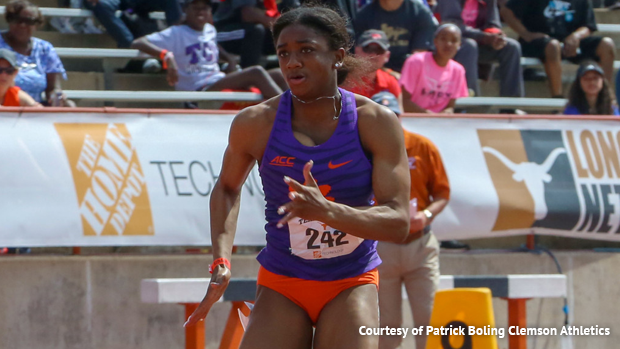 Winslow High grad Torie Robinson led off Clemson's sprint medley that won the Championship of America race in 3:45.05 and was second in the 100 dash in 11.32 at the Penn Relays. Penn State's Kiara Lester (Deptford High) anchored the 4x100 that was seventh in the C of A, ran a 200 leg on the third-place SMR, and split 54.30 on the 6th place 4x400 in the college race.

Penn State's Devin Bradham (Williamstown High) cleared 6-11 ½ to place second on misses in the high jump at the Penn Relays. Bradham is now ranked No. 66 in the NCAA.

Monmouth freshman Danielle Steff (Rancocas Valley) unloaded a PR and U.S. Junior National qualifying 156-0, No. 3 in school history, to place 8th in the women's javelin at the Penn Relays.