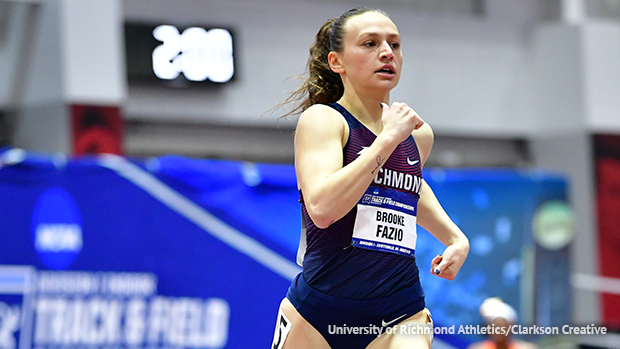 College record books all across the country took a beating this past weekend, and New Jersey athletes did a lot of the damage as several  big stars from the Garden State came up with eye-popping performances.

Here's a look at each record breaker and some other big highlights from the weekend.

The three school records for Rutgers all came in the field events when the Scarlet Knights hosted a tri-meet vs. Penn State and Maryland on Saturday at the Bauer Track and Field Complex in Piscataway.

Campbell, a redshirt junior out of South Brunswick High, cleared 1.79m (5-10.50) to finish tied for first and equal the school record set in 1999 by Kim Fife, who starred at Lakeland High.

In the dual between Rider and Monmouth at Rider in Lawrenceville, Rider's Kristin Siegle and Allie Riches, and Monmouth's Danielle Steff stole the show with school record breaking performances on Saturday.

Steff, a senior from Rancocas Valley High, broke her own school record in the javelin with a winning throw of 50.75m (166-5 feet), smashing the record of 50.05 (164-2 feet) that she set as a sophomore at the NCAA East Regional Championships. Steff won the javelin at the 2018 and 2019 MAAC Championships.

Riches, a sophomore from Hatboro-Horsham, made 11-10 in the pole vault to place second and break Rider's school record of 11-7.75 set in 2018 by former South Brunswick star Daniella Izzo.

FAZIO BURNS UP THE EIGHT

Richmond's Brooke Fazio, a 2017 graduate of Ridge High, continued her torrid senior year in the 800.

Richmond Women break the program record in the 4X800M running the fastest time in the NCAA this season at the 53rd Tennessee Relays.

Richmond Women break the program record in the 4X800M running the fastest time in the NCAA this season at the 53rd Tennessee Relays#oneRichmond #goSpiders @SpiderAthletics @JoynerFP https://t.co/kR1TtXV5ff

Then on Saturday morning, Fazio split 2:07.32 for Richmond on the school-record breaking 4x800 that ran a NCAA season best 8:39.88. The former Richmond school record of 8:44.29, which Fazio also ran on, was set in 2019. The 4x800 also included senior Maria Acosta, a senior out of Paramus Catholic High, who split 2:09.04 on the second leg. Acosta was also a member of the 4x800 squad that set the school record two years ago. Also on that 2019 4x800 team for Richmond was former Mt. St. Dominic standout Amanda Corbosiero.

just another weekend breaking both Tennessee shot put records! @JDubs_20 improves his own program standard by 3cm with a toss of 19.85m (65-1.5) pic.twitter.com/CK9U2dLqDM

Rahway's Jordan West, a redshirt sophomore, unloaded a 65-1.50 to break his own school record at the University of Tennessee when he finished first in the shot put at the Tennessee Relays on Friday. West, who broke his school record by three centimeters, is now No. 4 on the NCAA list for this season.

BOGUES ALREADY BEST EVER AT DAYTON

Dayton's Casey Bogues, a sophomore out of Middletown North, hasn't wasted any time making her presence felt on the college level .

In just her second outdoor meet ever for the Flyers, Bogues sent the javelin soaring 161-5 to smash the meet and school records at the Cedarville University Yellow Jacket Collegiate Outdoor Open in Cedarville, Ohio. The 161-5 broke the Dayton school record of 160-9 set in 2018 by Lillian Cook, places Bogues 38th on the NCAA Division 1 list this season, was a PR by nearly seven feet, and earned her A-10 Rookie of the Week Honors for the second straight week.

Villanova's Sean Dolan, a redshirt freshman out of Hopewell Valley, and North Carolina's Brandon Tubby, a graduate student out of Hillsborough High, keep getting faster and faster and closer and closer to the Olympic Trials qualifying time in the 1500m. Dolan dropped another a PR when he ran 3:38.60 to place seventh at the Joe Walker Invitational at Ole Miss on Saturday night. Tubby ran 3:39.73 to place second at the Tobacco Road Challenge at Duke University in Durham, N.C. on Friday night. The Olympic Trials qualifying standard is 3:37.50.

ICYMI: Our guys in the 1500 meters put up some of the fastest times in school history last night at the Joe Walker Invite #GoNova

With the way they are racing, it seems like just a matter of time before Dolan and Tubby get their qualifier. Dolan's previous best was 3:39.45 at the Raleigh Relays in N.C. on March 25. Dolan is now. No. 7 in Villanova history in the 1500m, and is currently No. 7 in the NCAA rankings this season. Tubby is ranked No. 12 in the NCAA rankings and now sits at No. 4 in UNC history.

Mu is coming off one of the greatest indoor seasons in NCAA history.