Friday night during the Hoosier Open in Bloomington, Indiana 2016 Olympian and University of Kentucky Wildcat Sydney McLaughlin opened her collegiate track and field career competing in the 300 meter dash.

The Kentucky freshman lived up to the hype winning heat one with a monster time of 36.12. That sets the indoor World Junior and low altitude American Collegiate records, previously held by Francena McCorory who ran 36.67 back in 2007.

She is the second fastest U.S. woman all-time and ranks sixth on the all-time world list, reported by Jon Mulkeen.

Her best at the 300 meter distance prior to tonight came during her senior year when she ran 36.82 to break the national high school record. This collegiate start to her career  actually comes in similar fashion to her high school debut back in 2013. She ran a New Jersey state record, at the time, of 38.55 during the Bishop Loughlin Games. Jump starting what would be a legendary four years in the high school ranks.

Sydney McLaughlin and Jasmine Camacho-Quinn go 1-2 in the Hoosier Open 300m. @GoSydGo with the Field House record in her collegiate debut.

McLaughlin graduated from Union Catholic HS in the spring of 2017. At the age of 16 the young track and field star out of New Jersey qualified out of the U.S. Olympic Trials for the 2016 Rio Olympics and eventually finished fifth in the 400 meter hurdle semi-finals running 56.22. She holds multiple high school national and state records in varying hurdle, sprint, and relay events. Read more about her entire high school career from freshman year to senior right here. 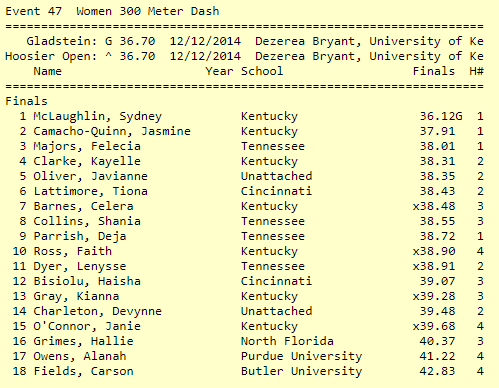