On a day full of remarkable performances, no team was more impressive than NJ #2 Kingsway as the Dragons threw down one of the greatest performances in meet history in the final race of the day.

Kingsway, under coach Christian Lynch, averaged a Group 4 meet record 16:23.4, No. 18 all time in Holmdel Park history, and had a mind-blowing 1-5 compression of 11 seconds to runaway with its first Group 4 title, 52-91 over defending champion and NJ #3 Princeton. NJ #6 Westfield was third with 127. Kingsway's only other state title came in 2012 when it captured the Group 3 championship.

Kingsway, which went 7-9-11-12-13 and placed first in the meet merge, did all that with its usual No. 1 runner Joe Grandizio placing fifth for his team.

Kingsway's victory sets the stage for what has the makings of a great showdown with NJ #1 CBA at next Saturday's Meet of Champions at Holmdel Park.

"I think we have a great shot at winning,'' said Grandizio. "I feel we can all go faster than we did today, and if we do that and keep our pack tight like we did today then I like our chances.''

CBA held out some of its top guns in the Non-Public A race and still rolled to its 28th state title, which extended its state record. Bernards is No. 2 all-time with 23.

Senior Brian Hill led the charge for CBA by winning in 16:05 as the Colts averaged 16:31.4 and outscored runner-up St. Peter's Prep, 37-137. Pope John was third with 150. St. Peter's Prep advanced to the M of C for the first time ever behind rising star Edwin Klanke, fourth in 16:24, one of the fastest times ever run by a freshman at Holmdel.

Hill said CBA is extremely motivated to regain the M of C title it lost last year when CBA's bid for a seventh straight title fell short. CBA was third last year, just five points behind the winner Princeton and three points behind Colts Neck. CBA has won a staggering state record 21 M of C titles. Paul VI has the next most with four.

"We are always motivated at CBA to join the teams of the past as state champions,'' said Hill. "That's how you are remembered at CBA, so we've been working very hard to get back to the Meet of Champions and try to win it. It's always a big goal for us.''

Another team that proved it's a contender for a top spot at the M of C is NJ #4 Mendham. Coach Roy Hamblen's crew won its second state title ever in Group 3 with a 78-90 victory over NJ #9 Hopewell Valley. Mendham, which averaged 16:31, went 1-2 with junior Jack Stanley first in 16:01 and soph. Jack Jennings second in 16:04. Mendham's other state title came in 2011.

Morris Hills, which had a crazy 1-5 compression of 20 seconds and 1-7 split of 34 seconds, picked up the third spot in Group 3 to advance to the M of C.

The Group 2 race belonged to NJ #10 Haddonfield, which outscored defending champion Voorhees, 53-69, to win its 16th state title. Robbinsville was third with 116. Haddonfield's 16 state titles is the third most in state history behind CBA's 28 and the 23 by Bernards.

Coach Nick Baker's Haddonfield squad trailed Voorhees, 31-32, after each team had four runners across, but Haddonfield's No. 5 man, Griffin Weiner, picked up 15 spots on the No. 5 man from Voorhees to clinch the championship. Haddonfield averaged 16:55.4 and had a 1-5 split of 40 seconds. 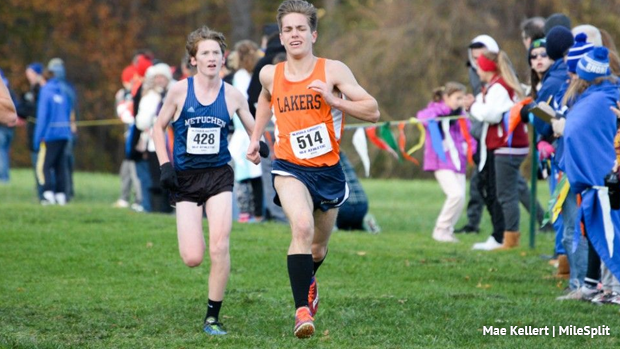 The closest boys team race of the day came in Group 1 as Mountain Lakes edged Metuchen, 109-112. Haddon Heights was third with 140. Jared Cooper (6th in 16:40) and Spencer Gillie (8th in 17:07) led the way for Mountain Lakes. It's the first state title for Mountain Lakes since 2010 and its fourth overall. Metuchen was seeking a third straight title.

In the Non-Public B race, Mater Dei, led by individual winner John Spinelli (16:28), won its first title in 10 years and its seventh overall. Mater Dei defeated Montclair Kimberley, 75-85. Newark Academy was third with 88. Mater Dei picked up 16 points combined on MKA at the No. 4 and No. 5 spots.