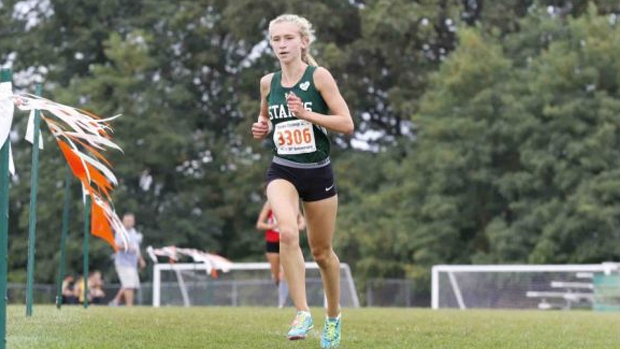 Alyssa Aldridge had the fastest girls New Jersey time at Cherokee. | Photo by RunningWorksPics for MileSplit

The Cherokee Challenge marked its 20th anniversary on Saturday while teams from NJ, VA, DE, and PA all clashed on the two mile course. NJ MileSplit was on site recording race videos, photos, and interviews.

The girls side was dominated by out of state teams with Pennsbury (PA), Unionville (PA), Tatnall (DE), and Oakton (VA) taking the first four spots on the teams merge list and 14 of the top 20 individuals were out of staters as well. However despite the heavy visiting talent New Jersey had a few standouts make some noise; leading the Garden State girls was Mainland Regional sophomore Alyssa Aldridge who ran the fifth fastest time of the day at 11:33.

If you have an Insider account and watched the race videos you saw that Aldridge had a rough start to the race losing her breakfast and the lead only two minutes in. By the time we saw her again on camera, around the 1.25 mark, she was once again in the lead and storming up the major hill on the course. She went on to win the sophomore race by 21 seconds and we have to believe if it weren't for losing precious time getting sick she may have even contended for the fastest time of the day. Anna Juul of Unionville (PA) had the fastest time honors with an 11:16 in the junior girls race.

Also leading New Jersey among the girls top 20... Niamh Hayes of Howell ranked 10th at the meet placing sixth in the junior race with a time of 11:45, Robbinsville's Lauren Kroepfl 11th overall coming in at 11:54, Alexa Weber of Ocean City 12th overall and second in the sophomore race with 11:54, and Norah Honrath of St. John Vianney and Kelsey Cummings of Triton Regional ranked 16th and 17th with 12:07 and 12:09.

The best team for New Jersey in the merge was Clearview Reg who ranked fifth averaging 12:27. They were led by sophomore Julia Rothstein ranked 23rd overall at 12:15.

Individual wise New Jersey was led by Jackson Memorial's senior Ryan Rafferty who had the third fastest time of the meet at 9:51. He placed third in the senior race, a two second improvement from 2014 at the same meet when he won the junior race with 9:53. Owen Long, a senior, ran 9:55 ranking fourth overall at the meet; Long is taking over the reigns as #1 for the defending Group 1 champion Haddon Twp squad. Last year the graduated Luke Petela won the senior race at this meet setting the tone for his stellar senior year and state championship campaign.

New Jersey had two race winners among the boys events. In the sophomore race Mulual Mu of Trenton Central won with a time of 10:08 which ranked 12th overall for the meet. In the junior race Jimmy Macpherson of Sterling HS ran 10:10 for the win just out kicking Cherokee junior Jack Shea, 10:11, who made a move on the last half mile. Watch that awesome race here.

For Insiders here is the boys Junior Race video.