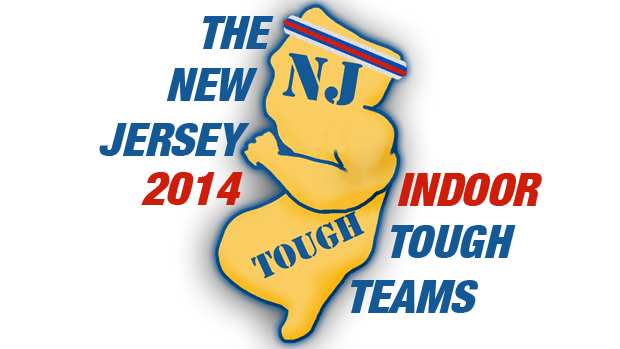 The team banners listed above are all of the programs represented on the girls NJ Tough Team. The full Boys Team 1st and 2nd are listed at the bottom of the article. Any statistical or name errors can be sent to rkellert@milesplit.com!

The Haddon Heights senior is going out on top for indoor. He has made huge strides shaving time off, in 2013 Miller was ranked 48th in the state with a time of 6.69 in the 55 meter dash. This season he is NJ#1 with a time of 6.46 that came with perfect timing for the Meet of Champions where he took his first MOC title. En route to that major victory Miller also won at the Group and Sectional level. Great season Kashif keep improving those times during outdoor!

Tough decision here, NJ has two of best 400m runners in the country... in fact they literally rank US#1 and US#2.  Zyaire Clemes of Trenton Central and Taylor McLaughlin of Union Catholic who only met head to head in two meets this season and split the series 1-1. Even though Taylor McLaughlin won the Meet of Champions show down when Zyaire took a tumble during the race Zyaire took the victory at Easterns between the two, when Clemes won with a US#1 47.13 and McLaughlin second with a US#2 47.30!

Clemes is honored here because he consistently hit low 49s or faster during four wins on six 400m performances (not even including his New Balance Nationals 10th place performance of 48.86). Clemes took gold early at the Armory Youth Holiday Classic, 49.09, the Mercer County Championships, 49.00, Group Championships, 49.12, and the Eastern States, 47.13! It didn't pan out for the Meet of Champions toward the end but that should just add fuel for training this outdoor season.

Clemes is number one in the nation and other than one race, where he took a spill, posted top performances throughout the season.

A five win season in the 55 meter hurdles for the talented Union Catholic star. A key athlete not only to his own individual accomplishments but to his teams sprinting / hurdling relays. Obafemi Animashaun is the top hurdler for our NJ Tough team. Congratulations on your first individual Meet of Champions victory!

James Buser of Mahwah ripped five straight wins in the 800m to start the 2014 indoor season! Even in early season December Buser was posting a 1:55.80 to win the Track Universe Invitational, setting the meet record in the process. He then continued on to win the Big North League, 1:59.70, a Sectional title, 1:59.07, a Group Championship, 1:55.53, and an impressive victory at Eastern States Champs with a 1:53.27.

When Buser reached the Meet of Champions his unbeaten streak was broken but he still raced an impressive 1:54.70. During Buser's MOC heat South Brunswick's star Morgan Murray outleaned him at the line with a 1:54.61. Then to both of their surprise Joe White of Depaul Catholic did the unthinkable and won the event out of the slowest heat with a 1:53.95!!

From there Buser competed at Nationals where he clocked a US#7 NJ#1 time of 1:52.55. And that isn't even his fastest time. He ran a 1:52.21 in 2013 indoor but was only ranked at NJ#6. The likes of Jacob and Isaac Clark, Derrell Manhertz, Ben Malone, and Edward Cheserek were still haunting other runners atop the leaderboards at that time.

Mike McClemens of Christian Brothers Academy only ran the 1600 meter three times this season and the mile run once, all four were either competitive times or gold worthy finishes. The best race came at the Meet of Champions when McClemens left burned rubber on the track en route to a 4:14.20 career best victory after a major push during the race. He seemed to have a little bit of fire from the previous meet where teammate Tom Rooney won the NPA Group 1600m title with a 4:14.26 to McClemens' second place 4:15.15.

This was his first Meet of Champions victory on the track; individually he won during this past fall cross country season. He had a regular season victory at the Colts Neck Invitational with a time of 4:22.55, and he was just trying to pick up a seed time for the state seedings during that race. Lastly McClemens also raced the mile run at the Millrose Games Trials for a time of 4:18.03 placing third.

This was a personal best season for McClemens time wise and he should look to continue the success with another possible MOC title this spring.

Blaise Ferro ranked NJ#3 after the Meet of Champions behind by only a second or so but when you look at the races and honors he won through the 2014 indoor season he is a fit for the 3200m spot on the NJ Tough team.

The first of three 3200m races the CBA sophomore faced came at the Shore Conference Championships, Ferro won with a time of 9:15.04 while teammate Tom Rooney took second at 9:15.06. Next up was the Non-Public A Group Championship. Blaise Ferro competed against teammate Rooney once again and played second fiddle this time with a second place 9:12.76 finish behind Rooney's impressive 9:11.50 Group title.

At Meet of Champions Blaise Ferro found himself alone up front and won his first Meet of Champions state title with a time of 9:11.50! Even though this is only his second year into high school racing Ferro looks confident and aggressive out on the track. Yes to all of you distance runners out there, he will be around two more years after this outdoor!

Let us take a look at Nick Pulli's stat line for the 2014 indoor season. 14 meets, 11 first place finishes, 2 second place finishes, eighth place at Nationals, 6 marks over 60-00!!! He swept his way through the State meets with a Sectional, Group, and MOC title in the shot put. And his end of season marks were so good that the last five were 60-00 or above. His best mark of the season and his personal best came on January 30th when Pulli launched a 63-01.75 at the SJ Cherokee Throwdown and it still holds on at US#5! The throw sequence can been seen in this article.

The New Jersey and West Deptford star also committed to the University of Maryland this season but before he leaves for the next level he has one more outdoor campaign to amaze us with.

Ian Kirk of Howell HS hit the ground jumping this season; he opened up at the Demarest Invitational on December 21st with a career best of 6-08! After that he continued on with a fantastic season racking up ten wins and one second place finish which came at the Group level when Barden Adams of West Orange HS came through in a tight jump off. Ian ended the state season on a good note however at the Meet of Champions he took his 10th gold medal with a jump off that led to an odd height of 6-7 (Kenny Clark of Ramapo had forced the extra jumps).

Luke Annichiarico of Northern Valley - Old Tappan competed in 12 meets earning 7 wins and 6 vaults over the 15-00 bar! His best performance of the season came during the Group 3 Championship where he broke the meet record clearing a height of 15-06! This performance is now tied for US#29 and NJ#1. He finished state season when placed second on jumps at the Meet of Champions at 15-0.

This was an exciting season between the top pole vaulters. At the Sectional level Dylan Altland of Kingsway set the, then, NJ#1 height of 15-1. The next day Luke Annichiarico of Northern Valley came in and set the NJ#1 mark to 15-2. They battled at the Group level before Luke got away from the rest of the pack with a 15-6 vault fest!

Both jumpers had pretty dominant seasons but Ian Kirk consistently pumped out first place finishes and hit his state leading clearance twice with a 6-08 bar at both the Demarest Invitational and the Metropolitan Invitational. He may have just lost at the Group level but wins at MOCs, Conference Champs, County Champs, Easterns and other meets show that he had a career season. With a clear projection from season to season his trending stats point toward a pretty good outdoor campaign. Great guy on and off the track good luck with spring!

A sportsmanship attitude, gold medals galore, and victories right through states. They are US#1 and they are the NJ Tough Team Relay. Great season boys!