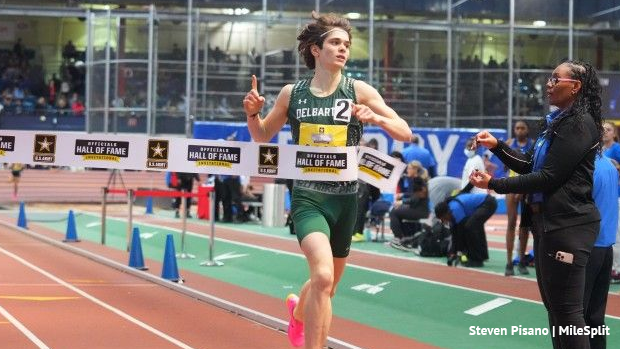 There were several red hot performances thrown down by New Jersey's athletes and teams at Saturday's U.S. Army Officials Hall of Fame Invitational, but Brian Boler and his Delbarton School teammates stole the show at the New York Armory.

Boler, a senior who is headed to Princeton University, got the Millrose Games qualifier he was looking for when he blasted a NJ No. 1 and US No. 7 time of 4:13.11 to win the boys mile as he joined his twin brother, Collin, in the high school mile field for the 115th Millrose Games on Feb. 11 at the NY Armory. There is a good chance that the electrifying Boler brothers are the first set of twins to ever qualify for the boys mile at Millrose. Collin, also committed to Princeton, qualified by running 4:14.98 to finish first at the Millrose Games Trials on Jan. 11.

Boler, who closed in 2:046/62.2 to win the mile, came back about 75 minutes later to join his brother in the DMR as the Boler boys lit up the track by bookending the fastest DMR in the nation so far this season. Delbarton cranked out a meet record 10:08.58, which isn't just the fastest time in the US this season, but it's also No. 7 in NJ indoor history!! Delbarton's 10:08.58 is nearly five seconds faster than the previous US No. 1 time of 10:13.19 that was run last weekend by Christ School of North Carolina at the Virginia Showcase.