The Washington Township boys, who racked up 40 points on the track and blasted the No. 1 time in the nation in the shuttle hurdles, won its first title in 14 years, the Toms River North girls captured its first championship ever, the two fastest girls DMR times in the nation were run, and Brian O'Sullivan and Samantha Strydesky put on remarkable shows in the air at Saturday's NJSIAA Group 4 Relays at the Bennett Center in Toms River.

After an amazing day of competition, our boys ended a 14 Year drought and captured the 2023 Group IV State Relay Championship. We are unbelievably proud of this tremendous group of young men- Well Done Gentlemen! :trophy:#TwpTrackPride #StateChamps @njmilesplit @WTHS_Athletics pic.twitter.com/vsG0TWVGPr

Washington's red hot shuttle hurdle team consisted of Zach Kotel, Nico DiGiacomo, Yashahya Brown, the state leader in the 55 hurdle sat 7.46, and Kanye Mills. Mills and Brown also ran in the winning 4x400, and Mills was a member of the runner-up 4x800.

Individually, the Rutgers-bound O'Sullivan once again put on sensational aerial performance by clearing 16-6 in the pole vault! That's the third time this season that O'Sullivan has made 16-5 or better. He made a PR and US No. 4 clearance of 16-6.25 at the Skyland Conference Championships last Sunday at Ocean Breeze. 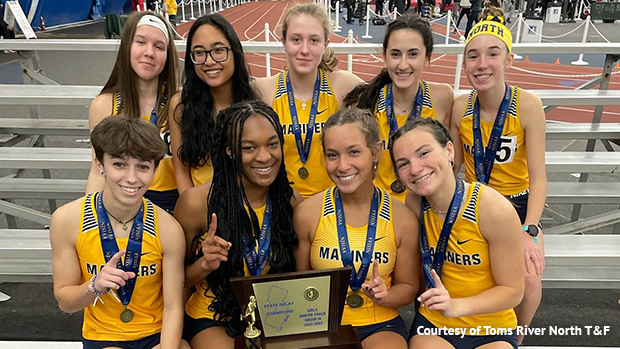 In the girls competition, Toms River North scored 44 points on track en route to a 50-35.50 victory over runner-up Eastern.

The biggest highlight of the girls meet was the blazing fast DMR's!!! TRN finished first in a red-hot 12:25.91, just edging Cherokee, second in 12:26.09). Those are the two fastest times in the nation this season!!!!!

The top individual highlight of the  girls meet was provided by UPenn-bound Strydesky of Howell, who cleared a NJ No. 1/US No. 5 5-8 in the high jump. Strydesky matched her PR of 5-8, which she cleared last spring when she won the HJ at the Meet of Champions.