Sydney McLaughlin made heads spin and jaws drops throughout the track and field world with an electrifying and earth-shattering performance when the superstar from New Jersey demolished her own world record by running a mind-numbing 50.68 to win the 400-meter hurdles in a race for the ages at the World Championships on Friday night at Hayward Field in Eugene, Oregon.

While there are some calling it the best performance in track and field history, McLaughlin's masterpiece should also be considered one of the greatest performances in any sport at any time. It was that spectacular!!!
The incomparable McLaughlin, a 2017 graduate of Union Catholic High School, blitzed the greatest 400 hurdle field ever assembled, finishing well ahead of runner-up Femke Bol of the Netherlands, second in 52.27. Dalilah Muhammad of the U.S., the 2016 Olympic gold medal winner and the defending champion, was third in 53.13. 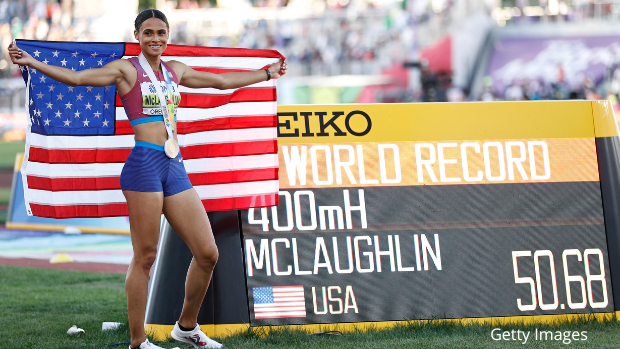 The race was hyped up as an epic showdown between McLaughlin, Muhammad, and Bol, the top three finishers (in that order) at the Olympics in Tokyo last summer, and the fastest three 400 hurdlers in world history. But McLaughlin made it a blowout by running much more aggressively on the backstretch than she usually does. By the time McLaughlin reached the 200 mark, the outcome was no longer in doubt, and it became a race against the clock. The clock had no chance as McLaughlin chased down history once again by freezing the numbers at 50.68!!
McLaughlin's astonishing time would have placed her seventh in the flat 400 at the World Championships, and would be the 19th fastest time in the world this year in the open 400!!! How crazy is that.
McLaughlin, the gold medalist in the 400 hurdles at the Olympics in Tokyo last summer, crushed the world record of 51.41 that she set at the U.S. National Championships last month at Hayward, and destroyed the World Championship meet record of 52.16 set in 2019 by Muhammad when she edged McLaughlin.

There are no words. We are witnessing GREATNESS!

McLaughlin, who will turn 23 on Aug. 7, has now lowered the world record four times in just under 13 months. Edwin Moses also broke the men's world record in the 400 hurdles four times, but that was over a span of seven years (1976-1983).
At the U.S. Olympic Trials in June of 2021, McLaughlin became the first woman to ever break 52 seconds in the 400 hurdles when she ran a world record of 51.90. She lowered it to 51.46 at the Olympics in Tokyo, and last month dropped it again to 51.46 at the U.S. National Championships. And now McLaughlin is the first woman to ever break 51 seconds, which just a couple years ago seemed like an unfathomable barrier.
When McLaughlin came charging across the line, the huge crowd erupted in jubilation and stunned disbelief. After she saw her time, McLaughlin sat on the track for several moments, soaking it in all in, as the fans gave her a standing ovation.
Even Allyson Felix, one of the greatest track and field athletes of all-time, is in awe of McLaughlin's talent.

She's just special!!! @GoSydGo In a class of her own:yellow_heart:

"I was just trying to process the lactic acid," she said during the post-race press conference. "And I was taking a moment to enjoy what had happened."
McLaughlin, who should be in the U.S. lineup in Sunday's 4x400 relay final, said it wasn't a perfect race.

What made her race so magical?

"It was a case of putting everything you've done in practice into the race, just letting your body do what it does, and releasing the gifts and talents that God's given you,'' said McLaughlin.

McLaughlin was asked about the possibility of running more flat 400's in the future, and possibly doubling the 400/400H.

"There's talk of doubles, talks of switching to the 400 or the 100 hurdles," she said. "Honestly, I have no clue. That's something I'll talk to my coach (Bobby Kersee) about it and see what the plan is.''

It's reached the point with McLaughlin that nothing she does should surprise anyone anymore! She has taken the 400 hurdles to heights never seen before, and she certainly has the talent to do the same in the flat 400.
McLaughlin may be the most dominant athlete in the world right now!

Sydney McLaughlin has lowered it by 1.48 seconds in 13 months and lowered it by .73 seconds tonight alone. https://t.co/S2izCGl0he pic.twitter.com/SmWpbIQvwR