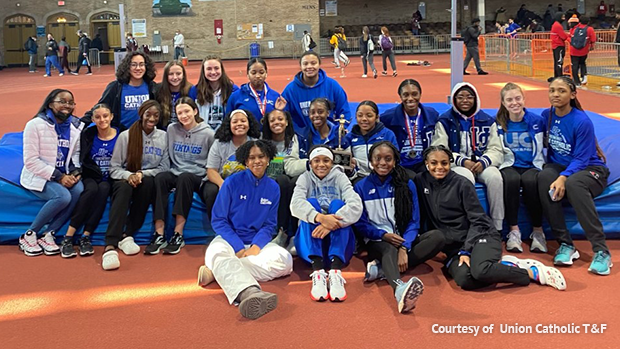 The Union County Championships on Sunday at the Jersey City Armory featured a historic quad by Greg McQueen, three meet records, three NJ No. 1 performances, and a pair of runaway victories for the team titles.

In the team competition, Charles Stock and Avery Keith smashed meet records to spark Westfield to its first boys title in several years, and the Union Catholic girls scored in every event and picked up wins from Maameyaa Nyinah, Jada Mia Puryear, and Ajanae Thompson on the way to their eighth championship in a row.

Westfield distance squad proved to be the biggest key to victory as the Blue Devils racked up 52 points in the 800, 1,600 and 3,200 combined en route to a 72-49 victory over runner-up Union.

Westfield's other points came from Charles Garretson, second in the 400, Paul Owen in the shot put, second with a 45-5.50, and a fourth from Justin Colby in the 400.

The Union Catholic girls continued its dominance by ringing up 79 points to win their eighth title in a row by 29 points over runner-up Kent Place.

UC had several athletes contribute to the winning effort. McQueen, who also four golds at the outdoor county meet last spring (100, 200, 400 and 4x400), has now captured an astounding eight individual gold medals (indoors and outdoors combined) at the county championships in his career!! And he has one more county meet to go this spring!!!

For SPF, the Duke-bound Jackson, the Meet of Champions winner in the 400 last spring, and Kennedy opened the meet by running the two fastest 400 times in the state this season. Jackson won in 56.99 and Kennedy was second in 57.78.