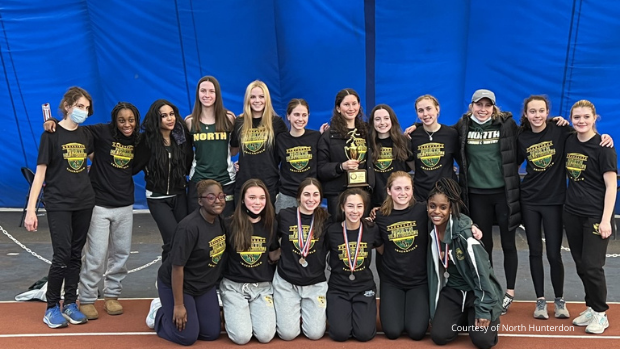 Lots of drama, record breaking performances, and an eagerly anticipated season debut added up to one of the most memorable Skyland Conference Championships in meet history on Sunday at the Bennett Center in Toms River.

This meet had it all!

The team titles weren't decided until the final event, and even after that the boys battle between Ridge and Hunterdon Central couldn't be settled as the two teams wound up sharing the championship. And the girls team competition was almost as close as North Hunterdon rallied to edge Hunterdon Central by just a half point.

Hillsborough junior Brian O'Sullivan cleared a school record 15-8 to moved into the No. 6 spot on the all-time state indoor list in the pole vault! O'Sullivan's 15-8 is the best mark in the state this season and No. 13 in the nation.

All-American Jackson Barna of Ridge, who is headed to Georgetown, took down the meet record and his school record in the 1,600m with a winning time of 4:17.51.

Marco Langon of Bridgewater-Raritan, another Villanova recruit, made an impressive season debut by winning the 800 in 1:58.62, the fastest time in the state so far this season. Langon won the Meet of Champions title in XC last fall, and earned All-American honors at the Eastbay National Championships last month. Heading into the meet-concluding 4x400 relay, Hunterdon Central held a 65-57 lead over Ridge. But Ridge earned a share of the championship by winning the race in 3:36.11 to earn 10 points to finish with 67. Hunterdon Central picked up two points by placing fifth in 3:43.15 to give the Red Devils 67.

Barna teamed up with Andrew McCabe, Andrew Hargy and Edward Condolon to win the 4x400 for Ridge. McCabe also placed second in both the 800 and 1,600. Also for Ridge, Patrick Doran made it a 1-2-3 sweep in the 1,600 by placing third, James Kisker was third in the 800, Hargy was fourth and Condolon fifth in the 400, Evan Woo placed fifth in the 55 hurdles, Hudson Yu finished third and Anthony Clerici was sixth in the 3,200.

Hunterdon Central used a very balanced attack to ern a share of the title as the Red Devils scored 36 points in the field and 31 on the track.

Hunterdon Central also picked up key points from Riley Wickenheisser, second in the 55 dash, and Doug Vail, fourth in the shot put.

In the girls team competition,  Hunterdon Central was clinging to a 54-52.50 lead over North Hunterdon as the teams took the line to run the meet-concluding 4x400.

Several athletes contributed to the dramatic victory for the Lions.

Hunterdon Central received victories from Dale Leonard in the 800, Kyla Massenburg in the 55 dash, and from Noreen Hussain in the 55 hurdles. Hussain also tied for third in the pole vault, and was fifth in the high jump.