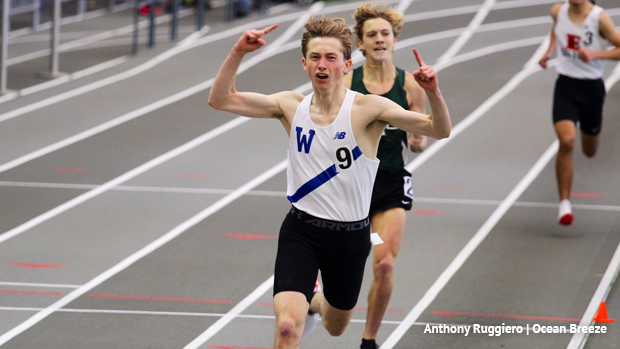 For the second day in a row, some of NJ's best lit up the track at Ocean Breeze Facility during Tuesday's Coach Glynn Holiday Carnival.

Connor Munson of Westwood was a triple winner, Conor Daly of Westfield was a double winner, and Fitzroy Ledgister, Jacob Heredia, , Kylie Prendergast, and Grace Kennedy all produced NJ#1 times.

The Elizabeth boys and Ramapo girls also threw down some hot performances in the relays.

Munson, one of the top multi-event stars in the country, won the boys 55m hurdles in 7.89 (PR of 7.84 in the trials), finished first in the pole vault (14-6), and won the high jump (6-0). Munson finished fifth in the decathlon at the National Championships last spring with 6,563 points, which is No. 3 in state history.

Ledgister, a senior at St. Peter's Prep, notched his second NJ#1 time of the season by winning the one-lapper in a US#5 22.02. Ledgister also sits atop the state leaderboard in the 55m dash with the US#5 6.38 he ran earlier this month.

In the boys shot put, senior Robert Manse III of CBA unloaded a PR and NJ#4 56-11 to finish first. CBA has an incredible 1-2 punch in the shot put with Manse and senior Tyler Mayerhoff, who is the state leader with a US#6 59-1. Can both guys hit 60 this season? I wouldn't bet against it!!

Prendergast, a senior at Livingston, took over the state lead in the girls 600 by winning the three-lapper in 1:41.95.

Kennedy, a senior at Scotch Plains-Fanwood, also moved into the NJ#1 spot in the 400m with her winning time of 58.10.