The greatest day of the NJ XC season is finally here!!

With 12 races starting at 9:30 a.m. on Saturday at NJ XC's Cathedral-Holmdel Park, there just isn't a better event in any other high school sport than the State Group XC Championships!

When the dust settles at around 3:20 p.m. on Saturday,  24 state champions will be crowned (12 teams and 12 individuals), and 20 teams and several individuals will earn spots at the Meet of Champions on Nov. 20 at Holmdel.

There are so many eagerly awaited matchups, riveting rematches, and red hot races. It's the kind of day that all you running junkies dream of.

What are the best races?

NJ MileSplit has come up with several storylines that you should keep an eye on, and a watch, on!

So let's get right into it!!

Oh, before I forget- bring some rain gear for the afternoon races. Looks like rain will it around noon and could last a few hours.

ok, let's start off with the best race of the day!!! CLASH OF THE TITANS

No. 1 ranked Union Catholic vs. No. 2 Christian Brothers Academy!!

This is the matchup everyone in the state has waited for all season!

CBA, the greatest program in state history, owns the state record with 30 state titles in Non-Public A, and is seeking a fifth straight championship.

Union Catholic is chasing it first title ever, and is attempting to end a quarter century run that has seen either CBA or Don Bosco Prep win every single Non-Public A title since Paul VI captured the title in 1994!!! That's right, no other team  has won in the last 25 years.

UC has been No. 1 in the state since it averaged 16:31 when it won its race at the Shore Coaches at Holmdel last month. Since then the Vikings obliterated the course record averages at Oak Ridge Park in Clark (15:49 ) and at Warinanco Park (16:03). CBA, which is clicking on all cylinders at the right time, cranked it up when it averaged 16:40 at the Monmouth County Championships at Holmdel, and dropped a 15:47 average at Ocean County Park when it won the Shore Conference Championships.

This race should be very close since there aren't many runners from other teams who will get in between UC and CBA as both teams figure to place its top five runners in the top 15.

What are the keys to victory?

Union Catholic has the edge up front with arguably the state's best 1-2-3 punch in the state in senior Shane Brosnan (the favorite to win the race), sophomore Jimmy Wischusen, and senior Myles Plummer. If UC puts three ahead of CBA's No. 1 it would obviously be very difficult for CBA to overcome that.

So CBA knows it has to break up that UC trio, and Nick Sullivan and Jack Moran will be out to do that as they lead the Colts attack up front.

CBA's advantage is its rich tradition (every runner who pulls on a CBA singlet gets a huge shot of adrenalin knowing it's their turn to continue the legacy), and they are deeper in the back of their pack than UC. So one of the biggest questions is whether CBA can get six or even seven guys in front of UC's No. 4 or No. 5 runner? That's what CBA might have to do to win.

There are always lots of what if scenarios in a big race like this, but it will probably boil down to which team closes the fastest over that last half mile through the back woods.

This has all the makings of an instant classic!!

HOW LOW WILL THEY GO

Although the Marco Langon of Bridgewater-Raritan vs. Jackson Barna of Ridge matchup at the North Jersey, Sec. 2 meet last week didn't live up to the hype when Langon ran a course record 15:02 at Oak Ridge and Barna had an off race and placed fourth, the rematch in the Group 4 race could be epic!

With the talent these two guys have, the Group 4 meet record of 15:31 set in 200-6 by Craig Forys of Colts Neck, is probably going to be toast! The overall meet record of 15:19 that current Villanova star Jack Jennings of Mendham ran to win the Group 3 race in 2019 could also go down.

And who knows, maybe Langon-Barna can produce another epic finish, like Jennings and Liam Murphy of Allentown did in 2019 when Jennings beat Murphy by a couple strides, 15:19 to 15:21.

The undefeated and Villanova-bound Langon dropped a 15:30 at Holmdel at the Shore Coaches Invitational, and said afterwards that he can run much faster at Holmdel!

The Georgetown-bound Barna, who caught a cramp last week vs. Langon, is too good to not bounce back and battle Langon all the way to the line. Barna ran a 14:41 course record at Ocean County Park, and blasted a 12:04.8 at Van Cortlandt, No. 5 in course history!

While all eyes will be on Langon and Barna, don't forget about sectional champs Jacob Heredia of Clifton, Dan Valentino of Freehold Township, and Kyle Rakitis of Kingsway. All those guy are capable of being in the mix up front. 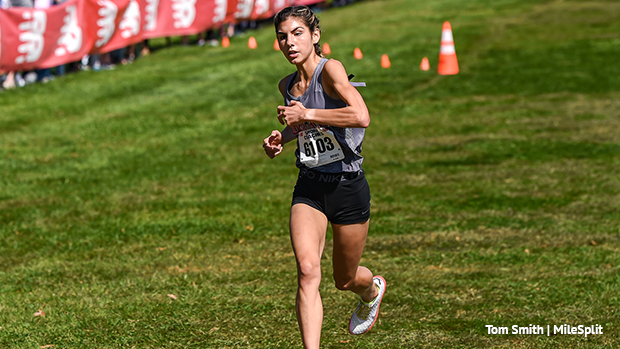 Angelina Perez of Lakeland said last month that one of her biggest goals of the season is to become the fastest New Jersey girl ever at Holmdel Park.

So that means the University of Florida-bound Perez, who owns a Holmdel PR of 17:36, will take the line in the Group 2 race targeting the 17:21 that Charlotte Bednar of Lawrenceville ran last November at Holmdel to set the NJ course record. The girls meet record is 17:28, set in 2010 by Megan Venables of Highland Regional in the Group 3 race.

In case you're wondering,  the overall course record is a mind-numbing 16:21 by Katleyn Tuohy of North Rockland, N.Y., set at the 2018 Shore Coaches Invitational.

Perez is coming off a course record 16:54 at Garret Mountain in the NJ. Sec. 2 Group 2 race, so she's certainly fit enough to take down Bednar's mark, and maybe even flirt with sub 17? The last time one program won both a girls and boys Group Championship in the same year is when Metuchen (Group 1) and Colts Neck (Group 3) pulled off the daily double in 2016. There is a chance that two programs could bust out the brooms on Saturday -  Haddonfield and Union Catholic.

Haddonfield is favored to win both Group 2 titles, and Union Catholic has chance to win both Non-Public A championships.

The NJ#4 Haddonfield boys, the biggest team favorite of the meet, should lock up a fourth straight title and 19th title overall! The Dawgs are led by Seth Clevenger, who is the pick to win the race. He went 15:55 at Holmdel at the Shore Coaches meet. Dayton and Triton have never individual Group Champions, and the Audubon boys have never won a team title at the State Group meet, but that could all change.

Junior Colin Riley is favored to break Dayton's drought in the boys Group 1 race. Fortuna, a senior, has been rolling all season and should become Triton's first champion in Group 3.

Audubon, fresh off its victory in the SJ Group 1 boys race over defending state champion Haddon Township, is the pick to win its first Group 1 title.

The NJ#2 ranked Colts Neck girls, led by individual favorite Lilly Shapiro, are the team to favored against a loaded field. Colts Neck, seeking its first title since winning a third straight in 2018, could make a run at its school record average of 19:10!!!

Leading the pack of teams looking to knock off Colts Neck are No. 6 North Hunterdon, No. 8 Mendham, No. 17 Old Tappan, and No. 20 Northern Highlands.

The boys Group 3 features several teams with a chance to win.

Individually, Triton's Dennis Fortuna is the class of this race, and should break 16 for the win. The girls individual race is a toss up between sectional winners Remy Dubac of Clifton, Brooke Hunter of Phillipsburg, Caroline Mehlhorn of Montgomery, Aubrey Pierontoni of Kingsway. But there are several other runners capable of crossing first, such as Nicole Clifford of Cherokee.

Newark Academy, the State Prep B Champions, has the frontal attack and depth to make it three straight boys titles, while Villa Walsh is overwhelming favorite to win its second straight and sixth in the past seven years in the girls race.

Individually, there's a good chance that St. Rose will get a sweep with big girls favorite Tilly O'Connor and Brian Theobald.

Like the Non-Public A boys race, the girls A race could be just as thrilling as No. 11 Union Catholic, No. 12 Kent Place, and No. 14 Red bank Catholic will square off.

Red Bank Catholic, led by individual favorite Cate DeSousa, has won the last two titles and five out of the last seven. Shore Regional hasn't captured a girls title since winning a fourth straight in 2004, and hasn't had an individual champ since Julie Ullmeyer captured the Group 1 title in 2003. But there's a strong chance that Shore gets back in the winners circle. Megan Donlevie is favored to join Ullmeyer as the only state individual girls group champion, and lead her team to victory.

With 12 boys and 12 girls teams getting auto qualifiers into the Meet of Champions, the scramble for the eight wild card berths should be exciting.

While most eyes are usually on the winners, there will be several great battles for wild card spots. One finish that should be a good one is the race for the third-place in the boys Non-Public A race between No. 18 Seton Hall Prep, the Essex County and State Prep A champion, and No. 11 St. Peter's Prep, the Hudson County and NJCTC champ. Both teams have a shot at earning a wild card.