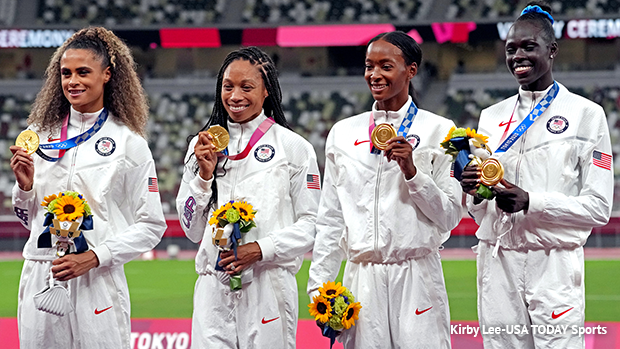 Sydney McLaughlin and Athing Mu, New Jersey's dynamic and electrifying duo, put an exclamation point on one of the greatest weeks in New Jersey sports history by capturing their second gold medal when they each ran legs on the victorious women's 4x400 relay for the United States on Saturday at the Olympics in Tokyo.

McLaughlin, who graduated from Union Catholic in 2017, celebrated her 22nd birthday by splitting 50.21 on the opening leg to give the U.S. a commanding lead, which it never relinquished. Mu, the 19-year-old phenom from Trenton, closed out the resounding victory by blasting a blistering 48.32 as she stopped the clock at 3:16.85, the fifth fastest time ever run in the world. It's the seventh straight time the U.S. has won the women's 4x400 at the Olympics, and the 3:16.85 is the fastest run in the world since the U.S. ran 3:16.71 at the 1993 World Championships in Stuttgart, Germany.

In addition to McLaughlin and Mu, the 4x400 "Dream Team'' featured the legendary Allyson Felix, and Dalilah Muhammad.

By winning a gold medal in the 4x400 for a fourth time, the 35-year-old Felix, finished her legendary career with a U.S. record 11 Olympic medals, which broke a tie with Carl Lewis for the U.S. track and field record. Finnish distance runner Paavo Nurmi holds the Olympic Record with 12 medals from 1920 to 1928. McLaughlin and Mu are the only two members of Team USA who won two gold medals in track and field in Tokyo. If a most Outstanding Performer Award was handed out for the U.S. track and field squad, McLaughlin or Mu would have certainly received it or shared it.

Mu, who dominated the race from the front the while way, is just the second U.S. woman to ever win the 800 at the Olympic Games, and the first since Madeline Manning won the two-lapper in 2:02.92 in 1968 in Mexico City. Mu is the youngest U.S. American woman to win a gold medal in T&F since Wyomia Tyus captured the 100 dash in Tokyo in 1964. About 14 hours after Mu's milestone triumph, it was McLaughlin turns to take center stage.

In the greatest showdown in the history of the women's 400 hurdles, McLaughlin was trailing defending champion Dalilah Muhammad by a couple strides as they approached the ninth hurdle. But then McLaughlin did what she does best, she dug down deep and roared back with a furious charge.

McLaughlin, still slightly behind Muhammad as they headed for the 10th and final barrier, used her superior flat speed and big heart to pull even as they came off the final hurdle, and then won the 40-meter sprint to the line, overtaking her rival with about 25 meters left. McLaughlin then stormed across the line to edge Muhammad and capture the gold medal in heart-pounding, electrifying fashion, freezing the clock at 51.46 to smash her own world record! Muhammad also ran inside of McLaughlin's old WR of 51.90 by crossing in 51.58 when 51.58 to earn the silver. McLaughlin set the previous world record of 51.90 when she finished first at the Olympic Trials in June.

McLaughlin and Mu owned these Olympics, and their performances have put New Jersey firmly on the map all across the globe as they have risen to the very top of the track and field world.

Both of them have always seemed destined for this moment

McLaughlin smashed every possible 400 hurdle record during her high school days at Union Catholic, where she was named the only two-time Gatorade National Athlete of the Year,  and "Syd The Kid'' became the youngest person since 1972 to compete for the U.S. Olympic Track and Field Team when she made the semifinals of the 400 hurdles in Rio in 2016 at the age of 17. Ever since making the Olympic Team when she was 16, the expectations and pressure have been enormous. But McLaughlin handled it like a seasoned veteran.

After one of the greatest one and done college seasons as a freshman at Kentucky, where she won the 2018 NCAA 400 hurdle title and broke the collegiate record in the event, McLaughlin turned pro and signed with New Balance.

Kersee had McLaughlin focus on the 100 hurdles for most of this early season to improve her speed, and her hurdling technique, primarily her non-dominant leg. She ran five 100 HH races during the season, including a PR and Olympic Trials qualifying time of 12.65, before her first 400 hurdle race of the season in early June.

Another huge key to McLaughlin's historic season is that Kersee had McLaughlin change her stride pattern down from 15 to 14 steps between the hurdles to help cut down the advantage Muhammad had on her in the past. That turned out to be a huge difference maker that helped McLaughlin become the best in the world. Mu, who ran for the Trenton Track Club instead of her high school team, made her name at a young age by dominating AAU meets. In the summer of 2018, Mu (pronounced Mo), she showcased her remarkable range by capturing gold medals in the 400, 800, and 1,500 and a she placed second in the 200 at the AAU Junior Olympics. But her big coming out party occurred at the 2019 US Indoor Championships at Ocean Breeze when she stunned all the professionals in the 600 by setting an American record with a time of 1:23.57, No. 2 all-time in the world. She was just a junior in high school at the time!

After being recruited by all the top D1 schools, Mu choose Texas A&M, where she put together what many people consider the greatest  college season ever by a woman. Mu, whose family left Sudan and immigrated to the U.S. before she was born, broke her own collegiate record in the 400m by running 49.57 to win the NCAA title, and also set the collegiate record in the 800 with a 1:57.73.

Mu, who turned pro after the NCAA Championships and is a slam dunk to win the Bowerman Award, now runs for Nike.