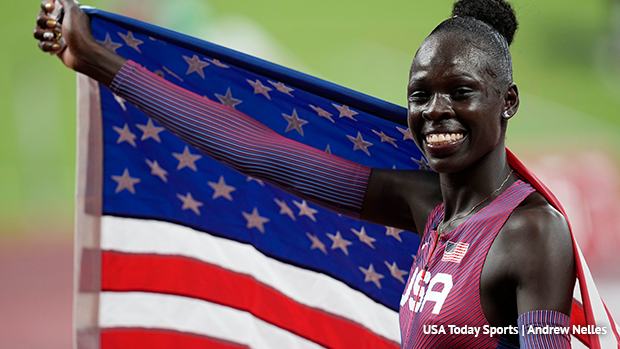 Athing Mu, the 19-year-old phenom from Trenton, pulled off an electrifying and historic victory in the women's 800-meter run to capture the gold medal on Tuesday at the Olympics in Tokyo.

Mu's victory marks one of the greatest moments in NJ track and field history as she became the first NJ woman to ever win an individual Olympic gold medal in track and field! Mu is also the first American woman to win the 800 at the Olympics since Madeline Manning ran a then Olympic record of 2:00.92 to win the gold in Mexico City in 1968, and Mu is the youngest U.S. American woman to win a gold medal in T&F since Wyomia Tyus captured the 100 dash in Tokyo in 1964.

To Athing Mu. I'm am so very proud of you. You brought tears to my eyes and filled my heart with joy. I praise God for the day you were born. The wait was worth it. Congrats
Raevyn, I knew you had it in you. My champions! Love y'all. Madeline

The last athlete from NJ to win an individual gold medal in T&F was the legendary Carl Lewis in 1996 when the Willingboro native  captured his fourth straight long jump gold medal in Atlanta. Lewis finished his career with nine Olympic gold medals (4 in the LJ, 2 in the 100, 1 in the 200, and 2 in the 4x100).

Mu, who graduated from Trenton High School in 2020, controlled the race from the front the whole way. Using her unique blend of strength and speed, Mu negative split the race, going 57.82/57.39! As she made the turn for home, Mu maintained a five meter gap on her way to the breathtaking victory. Great Britain's Keely Hodgkinson, who is also 19, closed fast to secure to the silver medal in 1:55.88 as she broke the British record. Raevyn Rogers of the U.S., in seventh coming off the last turn, hit the gas and rallied to win the bronze in 1:56.81.

What a year it's been for Mu.

I think it's pretty safe to hand her the Bowerman Award right now.

There is a good chance that we will see Mu on the track again in Tokyo. The coaches for Team USA have the option to put her on the 4x400 relay, and it would be surprising if Mu isn't put on that team when you consider that she split a record 48.85 on the anchor when Texas A&M won the 4x400 at the NCAA Championships.