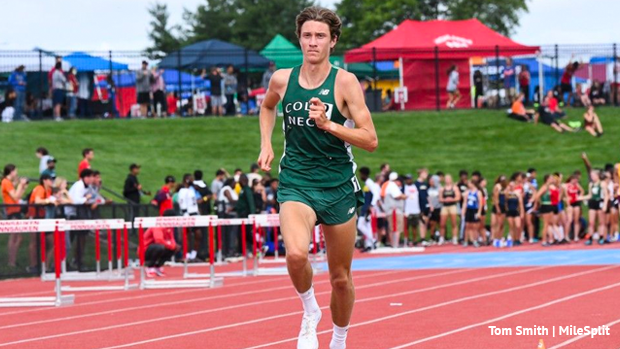 Salute To Seniors is a medium for "senior farewells". We invited this year's seniors to tell their stories from the past four years. We hope we can offer a chance to reflect on all the great moments these seniors were able to experience.

The series will run through July, please note that there is usually a large queue of submissions so there may be a wait until final posting.

What was your most memorable race or moment? Why is that?

My most memorable race would have to be the 2019 Cross Country Meet of Champs race. I was coming off a breakout junior XC season and tried to peak for this race and did a pretty good job of it. I was 9th overall and took 10 seconds off my Holmdel pb. This showed I belonged with some of the top guys in NJ.

Who would you consider your biggest competition over your four years and why?

I would say Jackson Braddock. From my first high school meet until the end of senior year, I have always thought of him as high level competition. We have raced plenty of times and had some pretty exciting finishes, so I am excited to continue to race him in the ACC in the next couple of years.

Winning the Steeplechase at the Nike Outdoor Nationals this past July.  All the work I put in throughout high school had paid off and everything seemed to "click" for me in the race. Crossing the line in first place was one of my favorite memories. I was thrilled after I won and to add my name to some of the Colts Neck greats who have also won major championships was special. I also ran US #6 all time and was just off the NJ state record.

I would tell my younger self to enjoy running. I started to see running as a job and not as a passion at the end of my freshman year and I no longer enjoyed the little things I once did. This made running unenjoyable and taxing mentally. I think the most important part of running fast is running happy, and the second most important is consistently getting runs in and doing core/bands/lifting/etc.. I would also tell myself to truly listen to my dad when he tells me to "trust myself" and all the training I have done.

I grew almost a foot in a year from freshman year to sophomore year and had growing pains in my knees that made it difficult to run pain-free. I showed lackluster effort in my runs the summer before sophomore cross season and it showed. I was no longer enjoying running and almost quit the team because I practically hated running. After the knee was better I was mentally hesitant to get back into running harder which led to my runs being slow and short and having several breaks, which showed in my times for sophomore year cross country. My team and coach. Some of my best friends were on Colts Neck XC and I am going to miss them a lot down the road. I will miss Coach Schlentz's humor and plethora of track knowledge and anecdotes. Also I will miss the atmosphere of late season Holmdel Park meets. All of NJ XC packed into Holmdel Park was something I loved being a part of both as a runner and a fan. There are few races I would rather take part in over XC Groups and MOCs.

- Consistency is key. Having a bunch of average runs is much better than a few great runs when building a base. Getting out there is half the battle so by doing that you are getting better.

- Get over it. Do not dwell on a race or run or injury so much that it overshadows the work you put in and affects the next race. Coach Schlentz has had a tremendous impact on my performance which has led to him influencing my life goals. He has guided me to run some fast times and it was not just through workouts and my training, but also with help mentally. There were races that Coach Schlentz practically called move for move what would happen and when. When you couple that with a coach who trusts his training and his athlete's ability, you are not only set up to run fast times but also be in position to win races. Mentally understanding why and what is going to happen to what to do makes the race a lot less stressful. He was also very influential in helping me find a college that fitted my wishes and was interested in having me on the team. He gave me lots of knowledge to shape my high school years, and taught me valuable lessons to help me grow as a person.

I will be running for the Wolfpack at North Carolina State University.

My parents. Both my Mom and my Dad are my biggest supporters and I can not thank them enough for everything throughout my life. From bringing me to all my practices when I was younger to almost never missing a race, I could not have done it without their support.

I would also like to thank my coach, Jim Schlentz, for always believing in my abilities giving me the tools to succeed. And thanks to my teammates for making my high school running years so enjoyable and memorable.