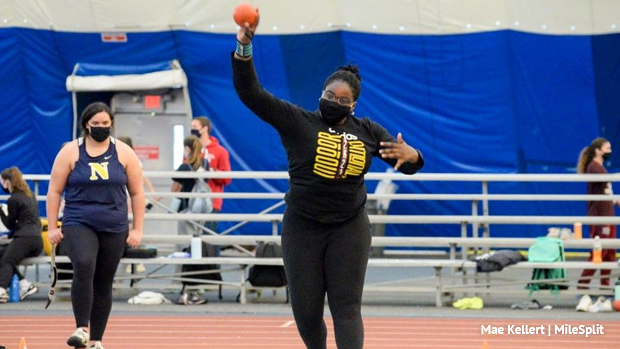 Salute To Seniors is a medium for "senior farewells". We invited the 2021 seniors to tell their stories from the past four years. We hope we can offer a chance to reflect on all the great moments these student athletes were able to experience.

What was your most memorable throw/moment? Why is that?

My most memorable throw was my second throw from indoor Monmouth County Championships. It was my first time going over forty and it was the start of my best series.

Who would you consider your biggest competition over your four years and why?

My biggest competition over my four years was Giuliana Bottino from RBC. We had been training together for months so we were always competing in a way, whether it be in the circle or when we were lifting. We're also both from Non-Public Monmouth County schools so when we were at the same meets we were always hyping each other up and pushing one another to hit bigger marks. I credit my first time going over forty to her.

My personal greatest accomplishment was committing to Rider University. The rest of the class of 2021 and I missed our outdoor junior season because of COVID-19. At that time, I was barely getting Division 3 interest, but now I am a Division 1 commit.

If I were writing a letter to my younger self, I'd say to trust in God, make the most of every opportunity I have, and that my coaches know more than me.

The most difficult obstacle I had to overcome was my slump from indoor my sophomore year. I had only broken thirty feet three or four times that season and I knew I was better than what was coming across. It was a very trying time but I have learned a lot from it and am glad to have overcome that situation.

I'm going to miss the camaraderie the most. I made so many friends and met so many great people who have made a very important impact on my life, even outside of track.

My coach, Jon Kalnas, is the whole reason I had such a great season. I started working with him in July of 2020 and it was just up from there. I started with a personal best of 35 and not being a notable competitor outside of Non-Public B and Monmouth County. By the end of my senior year I had a county, conference, and state title and was one of the top shot putters in the state. With his knowledge of shot put and lifting, I've been able to achieve goals that weren't originally possible, and to set higher standards for myself than I would've without him.

Name the top New Jersey XCTF moment(s) you have witnessed. Can be by level of greatness or just something that really stood out to you.

New Jersey Track and Field moments I won't ever forget are the boy's shot put finals for Monmouth County Championships in indoor and outdoor. Out of the eight guys in the final for indoor, seven of them were my teammates. We had a freshman (Josh Huisman) hit forty-five feet for the first time and Cole went 62'. In the spring championships six out of eight guys were my teammates, Josh hit fifty feet, and Cole threw 65. At the conclusion of that meet, four out of six of the girls medaled in shot, and three medaled in disc. My teammates and I realized that we were really the best shot/disc crew in the state and we couldn't wait for Shore Conference Championships.

After high school, I will be attending Rider University where I will be continuing my athletic and academic career.

I would like to say 'thank you' to God. He put me with an amazing team that made all of this possible; I'm a better person because of it.