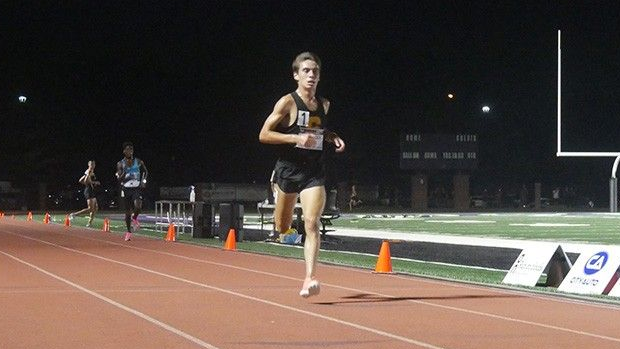 Braddock competing at the Music City Distance Carnival in August.

Jackson Braddock bounced back from his disqualification on Friday night in historic fashion when he burned up the track with the greatest 3200-meter performance in State Sectional history on Saturday morning at Washington Township in Sewell.

Braddock, a senior at Southern who was DQ'd in the 1600 on Friday, got redemption by becoming the first runner in all the State Sectionals combined to ever go under nine minutes in the eight-lap race when he blasted an 8:55.46 to win the South Jersey, Group 4 race.

The University of Virginia-bound Braddock took down the record of 9:00.57 that was set in 2010 by the legendary Joe Rosa of West Windsor-Plainsboro North in the Central Jersey, Group 3 race. Rosa set the still-standing state record in the two-mile when he ran 8:44.06 to finish first at the 2010 New Balance National Championships.

Braddock, who ran the final 1600 in 4:24.9, just missed his PR and NJ No. 10 all-time 8:54.02, which he ran to finish first at the Music City Distance Carnival last August at Lipscomb Academy in Nashville, Tennessee.

Braddock's 3200m victory on Saturday comes the day after he was DQ'd for interference after crossing the line in second place in an epic clash with junior Kyle Rakitis of Kingsway in the 1600.