Kyle Rakitis and Jackson Braddock staged the greatest 1600-meter battle in State Sectional history when the two distance running titans both ran under the All-Time State Sectional record with Rakitis crossing first by the slimmest of margins, 4:08.58 to 4:08.65, but the instant classic on Friday night at Washington Township High School in Sewell was marred by controversy when Braddock was disqualified.

In a clash between the state's top two ranked milers, Rakitis, a junior at Kingsway, and Braddock, a senior at Southern Regional, both ran well under the All-Time State Sectional record (all sectional meets in the state combined) of 4:10.2 that was set in 1982 by J.J. Clark of Columbia at North 2, and matched in 1983 by John Carlotti of Bernards at the Central Jersey Group 1 race.

But after the race, the University of Virginia-bound Braddock, who came into the race as the state leader with the NJ#8 all-time 4:06.25 he ran to win at the Ocean County Championships three weeks ago, was DQ'd when race officials ruled he interfered with Rakitis in the homestretch.

"I fell horrible for the kid,'' Baker said of Braddock. "I don't feel the call was justified.''

When asked if he appealed the ruling, Baker said he was told by meet officials that it wasn't appealable because it was a judgement call. Meet Director Ed Colona confirmed via email that interference was indeed the call, and that judgment calls are not appealable.

Here is the rule on interference as stated in the rulebook written by the National Federation of State High School Associations, which the NJSIAA follows for its rules.

"Interference is any action by a competitor that unfairly changes the natural running rhythm of a competitor during a race. This may include bumping, tripping, or running across a competitor's path.'' Penalty-Disqualification from event.

The race, which started much later than scheduled because of a lengthy weather delay, more than lived up to all the hype as Braddock led for every step of the race until Rakitis came storming back over the final 100 meters to catch him right before the line.

In addition to smashing the State Sectional record, Rakitis, who had splits of 65 point, 2:10, and 3:11 before closing in 57 point, also took down his own Gloucester Country record of 4:10.15 that he ran on May 19 at the Holmdel Twilight Meet. 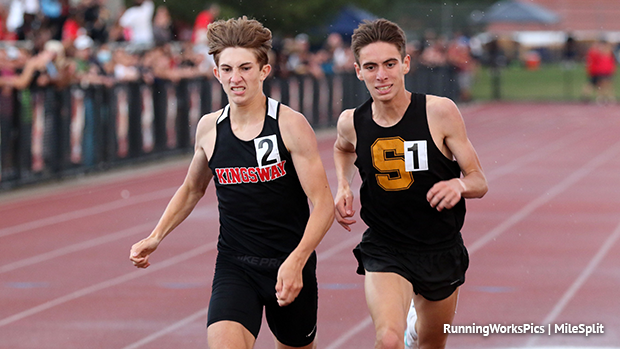