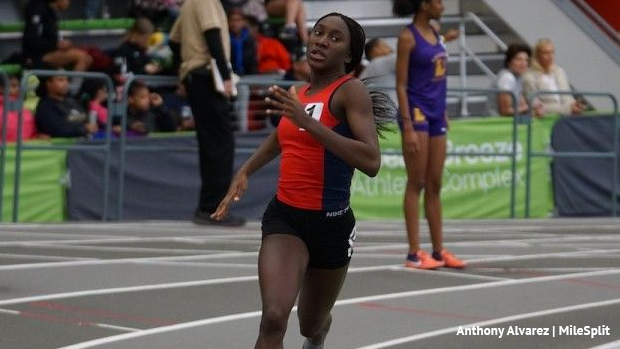 Watch the Meet of Champions LIVE on MileSplit on March 8th

With Sectionals behind us the NJSIAA Group Championships are set to kick off this weekend at the Toms River Bubble. State titles and advancement to the Meet of Champions are on the line.

In this article we cover a few of the interesting notes we came across heading into Group Championships. With six Groups in competition we are definitely aware there are more stories out there and will be watching closely for our Group by Group recaps. Good luck to everyone on their quest for titles, advancement, and PRs Friday and Saturday!

All meet records mentioned are based off the records listed by the NJSIAA.

8 Things to Look For at Group Champs

1) Keep an Eye Out for Defending State Champions

Below we list all State Champs from Groups last year that weren't graduated with the class of 2019. Some may not be competing and they have been designated below.

Foluso Adedeji of Weequahic is one of just two returning Group 1 Champions from last year. He won a close battle on jumps at 6-04 and that same competition that made it so close is returning again as well.

In fact four of the top six best high jumpers in New Jersey this season will be competing this Saturday for the Group 1 title. Adedeji is ranked NJ#2 at 6-08, Aden Tomeo is NJ#3 at 6-07 (led all Sectional performances with that height), and Willingboro's Kameron Smith recently cleared 6-07 as well to tie for NJ#3 while complimented by his teammate Nate Robertson who has a 6-06 jump for NJ#6.

This could be one of the hottest matchups of the weekend! Could they push each other to the 6-10 Group 1 meet record?

This is before we even add in the Group 4 defending champ and state leader, 6-09, Jamier Wright-Collins next week at Meet of Champs. One more meet until the Meet of Champions showdown we've been waiting for all season long in the girls shot put. Three girls have gone over 44 feet this season, Donovan Catholic's Bryanna Wilson 45-3.75, Denae Hill of West Orange 45-0.5, and Liz Makar of Pinelands 44-11.75.

While these three won't be facing head to head this weekend keep an eye out on who finds gains in their performance, Wilson in Non-Public A, Makar in Group 2, and Hill in Group 4. Makar led all Sectionals with her 42-5 two weekends ago, Hill ranked second at 41-04.75.

While we've been watching Wilson and Makar battle in head to head matchups and trading the state lead throughout indoor Hill really launched herself into the Meet of Champions title talk when she threw a big PR of 45-0.5 to win the Eastern States Championships. So she is firing up at the right time for State Champ season.

Also throwing well as of late is Jada Sewell of Demarest, she went for a PR mark of 42-0 at Easterns placing fourth, and was ranked third out of all Sectional throws with a 41-3 at North 1 Group 2 just days before that.

Brielle Kelly of Hillsborough, Rachel Lavigne of Toms River East, Melissa Aymil of Mendham, and Story Young of Rahway have all gone 40+ this season as well.

The Delaware Valley senior Kyle Reers dropped some major time on his indoor 800m this season running almost 8 seconds faster than this time last year with a 1:55.97 at Central Group 1. His performance led the entire Sectional round combined and came in a race he had a five plus second lead in by the end of the run.

His performance at Sectionals is also the second fastest run on the Bubble flat track in this 2020 season. And it is already under the listed Group 1 meet record of 1:56.49.

He'll have stiffer competition and faster racing to push pace with from larger Groups heading into the Meet of Champions with the likes of Nicholas Medeiros of Old Bridge, Stone Caraccio of Kingsway, Gabriel Moronta of Pleasantville, Elijah Brown of Union Catholic, and so on. That's just part of what makes this small school star and his late run for PRs so interesting! 5) Sprints & Hurdles Showcase in Non-Public A

Four of the top 10 girls 55 meter sprinters in the state will be battling it out in the Non-Public A amongst the sprints and hurdles.

Add in Red Bank Catholic's Tess Darnell for the 400m (NJ#6) and Aliya Rae Garozzo of Paul VI in the 55H (NJ#3) and we've got a loaded Group meet on our hands. This is a definite tune up preview for some of the finals you will see at the Meet of Champions next week! If you followed along during the fall you'll recall the epic seasons Liam Murphy, Jack Jennings, and Kevin Antczak had. All of them met multiple times starting with the Group 3 and ran all the way through two National meets together.

If you remember the 2019 Indoor Meet of Champions Murphy and the now graduated Devin Hart battled to the line in one of the best races in state history, Murphy edging the win at 8:54.22!

Assuming all parties run in this amazing 3200m field. You can add the likes of Matt Bogdan of Colts Neck, Alec Gironda of Chatham, Zachary Hodges of Mendham, and more to make this a memorable race. We could even see a double event showdown between Murphy and Jennings if they go for the 1600m as well. 7) Multiple 16+ Vaults This Weekend? Even A State Record?

There has never been a 16-00 vault at Group State Championships before and we have a chance to possibly see TWO in the same year. In recent years we've seen multiple 15-06 clearances tying the All-Group record including Craig Hunter in 2013, Luke Annichiarico in 2014, and most recently Liam Landau in 2019.

Looking at this year's meets the defending Group 4 Champ Bradley Jelmert cleared 16-0.25 last weekend at North 2 Group 4 and Marco Morales 15-08 at South Group 2. This season both of these athletes have cleared the 16-00 bar.

Bradley Jelmert is second all-time in state indoor history at 16-10 and is chasing the indoor state record of 17-0 held by Bill Lange since 1980. From this point on Jelmert is on state record watch! Keep an eye out during Group 4.

Marco Morales, who just announced a commitment to Rutgers with his brother Nico Morales (another great vaulter in NJ), made it over 16-0 in early February. He'll be competing in the Group 2 meet.

Conor Reilly of Union Catholic has cleared 15-06 this season as well, he'll be opening his state season defending his state title in Non-Public A.

Victoria Vanriele has never lost an NJSIAA race at the 400m and 800m distances indoor or out, and in the 11 individual races she has run at the Toms River Bubble over the years she's earned 11 gold medals. Now in her senior season Vanriele is attempting to win her fourth straight indoor Group State title and then next week her fourth straight indoor Meet of Champions in the 800m.

With the move of the Meet of Champions to Ocean Breeze this year, this will be the Governor Livingston star's final high school run at the Toms River Bubble. A venue she holds the 800m facility record at after her 2:08.81 performance to win the 2018 Meet of Champions.

She led all of Sectionals with a 2:10.50, now owning five of the top six 800m times ever recorded at the Bubble, and had the ninth fastest 400m dash time when combing all this year's Sectionals running 58.97.