Possibly a microcosm of the overall team battle for the girls Monmouth County Relay Championship title the Red Bank Catholic and Rumson-Fair Haven girls had it out during the very first event, the 4x800m relay, on Friday night. RBC took the win with a state leading 9:40.19 US#5 and Rumson-Fair Haven wasn't too far behind at 9:42.94 for NJ#2 US#10.

In the final team scores RBC would win the meet, their second straight title, with 54.2 points to Rumson's 49.2 total. You can watch their entertaining showdown of a race in the 4x800m above, the final 4x400m event that sealed the team win will be available soon as well on the meet page.

Rumson had a high ranking win of their own though, in the SMR where they returned the favor to RBC winning another close one 4:18.99 NJ#3 to RBC's 4:19.16 NJ#4. Both cracked the top 15 Nationally in that event as well.

That 4x800m wasn't the only state leading race that night however, in the DMR the Colts Neck girls took a commanding lead and went on to win running 12:40.81 US#8.

There was also great race to watch in the shuttle hurdle relays, a close finished between Middletown North 33.03 NJ#6 and Rumson-Fair Haven 33.06 NJ#7. 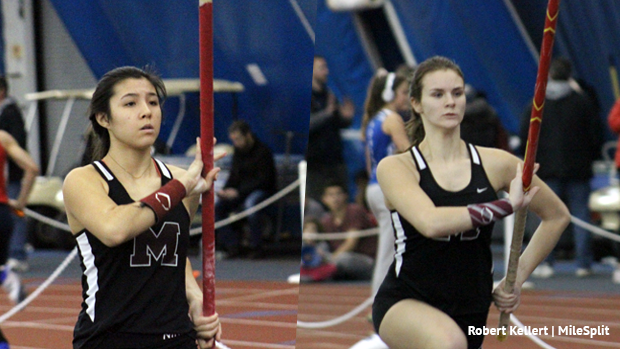 Another field relay meet record was destroyed in the girls shot put where Howell's Bryanna Wilson and Hanna Rosenmertz totaled 75-02. The old record was held by Asbury Park since 1990 at 69-10! Wilson led the meet throwing 38-02 and Rosenmertz second overall at 37-10.

In the boys high jump Middletown South's Mark Anselmi opened his season clearing 6-06 and is tied for NJ#2.

(Note that race videos from this meet will be uploading all night through to Saturday morning, we recorded every track event except the JV 4x800m. You can find the race videos on the meet page.)