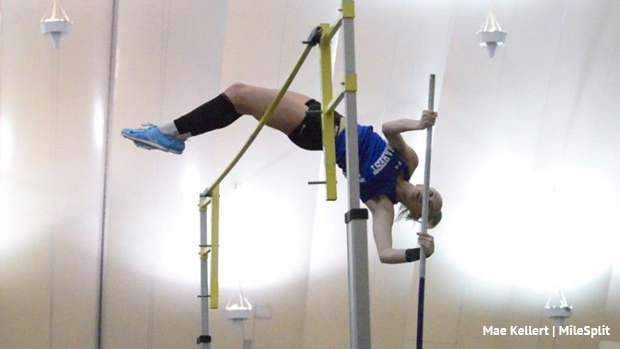 Sydney Woods wasted no time climbing way up on NJ's all-time list in the pole vault.

In her  second meet of the season, the senior at Demarest came up with one of the greatest performances in state history when she cleared 13-0 3/4 to move into the No. 2 spot on the state's all-time indoor list and break her own Bergen County record at Monday's Spike Shoe Holiday Festival at the Armory Track and Field Center in New York.

The UPenn-bound Woods, who came into the season with a PR of 12-6 1/2, became the fifth girl in state history to clear 13-0 indoors or outdoors as she shattered the Bergen County indoor record of 12-7 that she set this last Friday at the Tim St. Lawrence Invite at the NY Armory.

The only vaulter in state history to go higher than Woods indoors is Danielle O'Reilly of Shawnee, who cleared a state indoor record 13-5 in 2004.

Woods is now the No. 3 vaulter in state history-indoors and outdoors combined.

Hayley Horvath of Notre Dame is No. 1 all-time with the state outdoor record of 13-5 1/4 that she cleared to win the Meet of Champions last spring. O'Reilly is No. 2 with her state indoor record 13-5, and also has an outdoor PR of 13-3.

The girls pole vault should be one of the most exciting events this NJ this season as Woods and Pingry junior Caroline Dannenbaum are each capable of making a run at the state record. Dannenbaum made a state sophomore record 13-0 last spring when she was second to Horvath on misses at the State Non-Public A Championships.