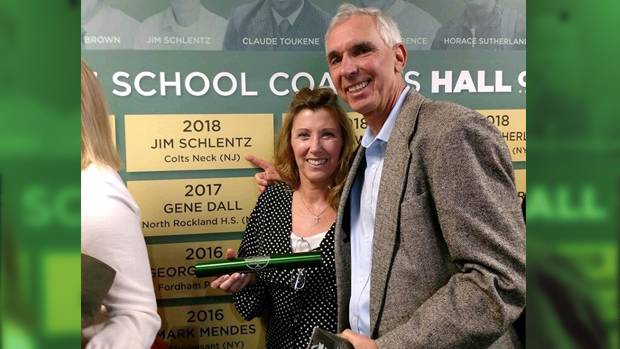 Jim Schlentz, one of New Jersey's top distance running coaches for five decades, was recognized for his great success on Saturday when he was inducted into the New York Armory Coaches Hall of Fame.

Schlentz, who has coached all three season at Colts Neck since the school opened its doors in 1998, was honored along with four other coaches during a ceremony at the fourth annual Coaches Hall of Fame Invitational at the Armory's New Balance Track & Field Center in Washington Heights.

"The five coaches inducted this year are not only some of the most successful coaches in U.S. track and field history but all are considered to be outstanding educators and leaders of our youth," said Tim Fulton, The Armory Foundation's Director of High School Track and Field. "I have gotten to know many of them personally over the years and they inspired not only the athletes they coached but also the coaches they coached against. They truly are the best of the best in every aspect."

Schlentz added to his remarkable coaching resume this past season by leading the Colts Neck girls to another sensational campaign on the trails.

Schlentz, who coached two of NJ's all-time greats at Colts Neck in Craig Forys and Ashley Higginson, was also named Eastbay National Coach of the Week in 2007 and has won the NJ State Coach of the Year award from three different papers/organizations in three different years.

Schlentz was an All-Shore runner for Freehold High School and was on the team that won the Shore Conference XC title in 1970. He competed in cross country and track in college at Springfield College, MA and continued to compete after graduation.

Schlentz started his coaching career as Assistant Girls Coach at St John Vianney in the spring of 1977. He became Head Cross Country Coach of both boys and girls that fall, and would coach the distance runners through 1982. He coached three state individual champions and his cross country teams finished as high as 2nd (boys) and 3rd (girls) in the Meet of Champions. He then moved on to LaSalle University in 1983 and was the assistant coach for cross country and track, specializing in the distance events.

In his two years of coaching at LaSalle, Schlentz coached the track teams' first female NCAA Division I qualifier, and then he coached elite athletes as head coach of the Reebok Mid Atlantic distance team from 1985-87, where two of his athletes qualified for the Olympic Trials in the marathon.

Schlentz moved back to college coaching as Head Coach of the women's cross country and track teams at Wagner College in 1988. They won two conference cross country titles and had the school's first female NCAA Division I qualifier. He also started coaching elite athletes on the side, including Kate Fonshell.

In 1995, Schlentz left Wagner College to focus on Fonshell's Olympic dream. In their 3rd year together, Fonshell won the US Olympic Trials 10,000 meter run to make the 1996 Atlanta Olympics team.

Schlentz also coached the Asics Club East distance team, which finished 4th and then 3rd as a team in the 1997 and 1998 US National Cross Country Championships. Schlentz also coached his wife (Madelyn Noe-Schlentz), who set three National Masters (age 40 and over) records as well as qualifying for the US Olympic Trials in the marathon at the age of 41.