Devin Hart and Jack Stanley waged a battle for the ages at Holmdel Park on Saturday.

In an epic duel that will go down as one of the closest and greatest races in state history, Hart held off a hard-charging Stanley by the slimmest of margins in a breathtaking finish that sent the huge crowd into a frenzy as both runners stopped the clock at 15:36 at the 47th NJSIAA Meet of Champions.

It was the second straight title for Hart, a senior at Point Pleasant Boro, as he became just the seventh boy in state history to repeat as champion. The last boy to repeat was Craig Forys of Colts Neck (2005-06).

NJ #1 and US #10 Christian Brothers Academy also repeated a champion with a 68-86 victory over NJ #3 Haddonfield. It's the 23rd M of C title for CBA, which matches the total number of combined titles won by the rest of the entire state. That's right, it's CBA 23 and the rest of NJ 23.

Hart came into the race as the heavy favorite to win his second straight title. But Stanley, a senior at Mendham, was fueled by his underdog status and determined to pull off the upset.

Like a couple of boxers, Hart and Stanley traded big shots as they pounded their way around the 5,000 meter layout in an attempt to break each other as they went back and forth on the way to delivering an instant classic.

After running side by side for the first mile, which they hit in 5:13, Hart and Stanley went into the bowl shoulder-to-shoulder.

That's when Stanley delivered the first big haymaker of the race. 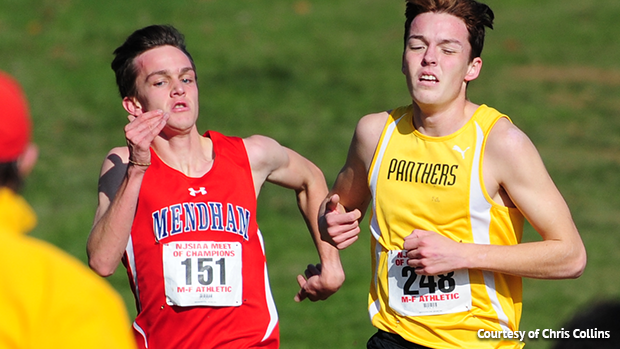 But just after two-mile mark, Hart countered with a massive surge of his own, reeling in Stanley and blasting to the front. Now it was Hart's turn to try to put the race away as he pushed the pace around the tennis courts and toward the downhills in the back woods, opening a 20 meter gap with about 1,000 to go.

It looked like Stanley was finished as Hart was pulling away with each stride.

But Stanley refused to go away, and he found another gear just before the last downhill in the woods and was able to close to gap to just 10 meters when they hit the homestretch.

With Stanley hot on his heels, Hart dug down deep again and started to kick furiously to try to hold off Stanley, who closed the gap to five meters with about 25 meters to go. Then with 10 meters to go, Stanley, with his arms pumping feverishly, made one last big push and pulled alongside Hart just as the two crossed the line together. It was virtually impossible to tell who won.

Just how close was it?

The meet's official timer had Hart finishing .14 ahead of Stanley before the times were rounded up to the full second. Had the race been 5,001 meters, Stanley would have won.

The Hart-Stanley showdown marks just the second time in meet history that the first two finishers had identical times. The other time came in 1979, the first year that Holmdel's current course was used, when Jim Smith of Haddonfield dove across the line to edge Kevin Lundy of Long Branch as both runners finished in 16:09.5.

The Stanford-bound Hart said Stanley's bold move out of the bowl stunned him.

"He really turned it on and put the hammer down and I thought at that point I'd be done because he put a 20 meter lead on me there,'' said Hart.

But Hart was able to keep Stanley within striking distance as they hit the 2-mile mark in 10:19. Then, with Stanley about three seconds ahead, Hart pulled the trigger and hit the gas just past the 2-mile mark.

"I started to reel him in a little and finally passed him,'' said Hart. "I thought he might be done, so I opened a lead and thought I had it until I came out of the woods.

Hart knew Stanley was right on him again when they came out of the woods.

"I could tell by the way the crowd was going wild that he must have been getting close, so I took a look back and he was closing fast, so I put the jets on,'' said Hart.

Thinking he had the race won, Hart eased up just a little right before the finish, which gave Stanley the opportunity he needed to try to steal the win.

"I thought I had it so I started to coast a little, and he comes out of nowhere in the last meter and I honestly thought he got me because of how fast he went past me,'' said Hart, whose PR at Holmdel is 15:34.

Hart, who has now won five M of C titles in his career (two M of C titles outdoors in the 3,200 and one indoors in the 3,200 to go with 2 XC titles), called this win his most satisfying.
"I didn't know I had it in me to catch a guy like that, and with all the back and forth and the excitement at the end, this is definitely my most satisfying win,'' said Hart, 10th at the Foot Locker XC Nationals last year. "After he (Stanley) ran 15:45 (to win the Group 3 race) in those conditions last week, I knew he would run faster today. He's a great runner and ran a great race today.''

Stanley said he had a wide range of emotions over the final 100 meters of the race.

"I thought he had me (with about 50 meters left) because he was keeping the same distance between us, but then I saw him look back a me and I think he thought it was over, so I just start to sprint as hard as I could and I almost got him,'' said Stanley. I kind of thought I had him, but I really didn't know.''

Stanley, whose 15:36 ties him for the Morris County record at Holmdel that was set by Chatham's Ben Massam in 2005, said he felt that making a big move going out of the bowl gave him his best shot at winning.

"I do a lot of training on hills, so I tried to get away from him as much as I could coming out of the bowl,'' said Stanley, who will be running at the Foot Locker Northeast Regional next Saturday at Van Cortlandt Park. "Then at 2 miles I wasn't feeling that good, I might have pushed a little too hard on the hill and I had a little stitch and then he went by me. Then I started feeling better and picked it up again and closed it back up to 10 meters on the uphill before we came out of the woods.''

While understandably disappointed that he didn't get the win, Stanley didn't hang his head after the race. He knows he left everything he had out on the course and gave the state's best runner all he could handle.

"I never thought in my sophomore and junior years that I'd ever be able to be near Devin, but I was able to come really close,'' said Stanley. "So I'm definitely really happy with how I ran.''

In the team competition, CBA added to its remarkable legacy as the state's best program with a hard-fought 18-point win over Haddonfield. It's CBA's eighth title in the past nine years.

McInerney said winning the 23 title for CBA at the M of C is a great accomplishment, but now it's time to focus on an even bigger goal.

"Twenty-three is a number to be proud of and our program will never be content,'' said McInerney. "Every year we push to win this, and it's a proud moment and we'll soak it in, but now we'll get ready for even bigger things.''

"Winning a national title has been our goal since June, and that's never going to change,'' said Reid.

It was quite a day for the CBA program.

Not only did the Colts add to its legacy with a another M of C title, but one the greatest runners in CBA history, 2016 grad Blaise Ferro, was the No. 4 man for Northern Arizona today to help lead the Lumberjacks win  its third straight NCAA XC Championship! 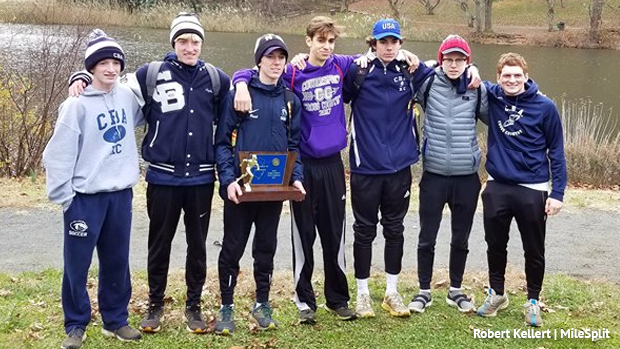