What a meet for the Holmdel Hornets! The girls of Holmdel won the first Monmouth County cross country team title in school history on Tuesday. It came after an early battle with NJ#6 Colts Neck who scored two of their runners ahead of the first finisher for Holmdel.

The individual girls champion and Colts Neck's first finisher was senior Delia Russo who crossed the line at 18:44, a course PR by 50 seconds! She's had a great start to the season and now has her first individual county title. The last Colts Neck individual champions came during a three year run just over a decade ago when Briana Jackucewicz won in 2007 and Ashley Higginson 2005 and 2006.

There was plenty of talent out front on Tuesday, Corina Vidal of Henry Hudson and Maddy Kopec of Red Bank Catholic also broke 19 minutes in second and third. Amanda Stone of Monmouth Regional, 19:22, and Natalie Shapiro of Colts Neck, 19:28, closed out the meet's top five.

The boys side saw a first time county champion as well with Colin Flood of Manasquan. After a battle to the line with Freehold Twp's Nick Lundberg he crossed at 16:04, Lundberg 16:06, and is knocking on that sub-16 minute barrier at Holmdel Park. He's Manasquan's first county XC winner since 1975 when Chuck Ferrel won his second straight.

This is the fourth win of the season for Flood who's also seen gold at the Thompson Park Class Meet, Six Flags Wild Safari Invite, and A Central Divisional.

All this and we haven't even touched upon the CBA title streak continuing. Now 17 straight years of Monmouth County XC Championships for the Christian Brothers Academy boys. The last team without CBA on their chests to win was Red Bank Regional back in 2001, and that was just a hiccup at the end of a separate 19 year run for CBA now owning a total of 49 just for cross country. 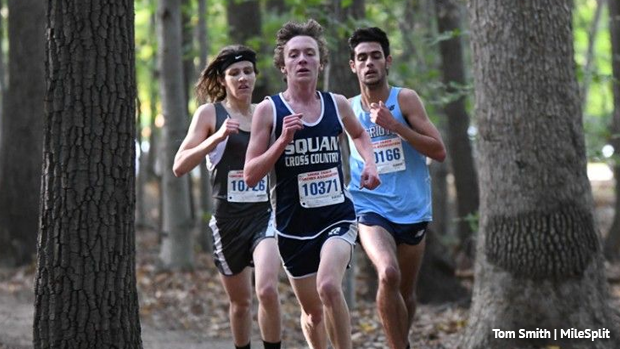