Athing Mu of the NJ's Trenton Track Club continued her sizzling summer by turning in one of the greatest performances in meet history with an electrifying display of dominance and range at the AAU Junior Olympics that concluded this past weekend at Drake University in Des Moines, Iowa.

Mu, a rising junior who doesn't compete for her high school (Trenton), put on a remarkable show in the 15-16 year-old age group competition by winning three races and narrowly missing becoming the first athlete in meet history to win four golds on her way to being chosen as the Joel Ferrel Outstanding Girls Track Athlete of the Meet. 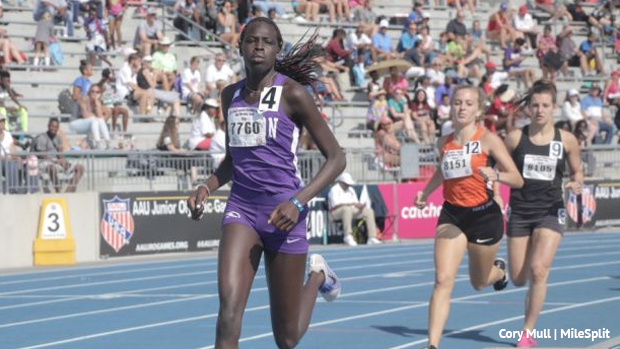 Mu returned to the track on Thursday and ran 23.98 to place second in her 200 heat to qualify for the final.

Mu came back to win the 400 on Saturday in 52.83, which set the stage for her attempt to complete a historic quadruple later that day in the 200.

In the 200, Mu nearly made history, finishing second in 24.07, just .06 from an unprecedented fourth gold medal. Jassari Carter of Pembroke Pines in Florida crossed first in 24.01 to barely edge Mu at the line.

Mu's triple and near quad put an exclamation point on an epic season.

I didn't become "the" historical figure this past JO's but I did leave a mark on the track with my efforts which I hope will be the thing that leaves me in history. With God's grace this year's season has been the absolute greatest of all time, and I'm happy to end it with pic.twitter.com/eFnvjQd4R5