Christian Brothers Academy opened Thursday's meet with a win in the distance medley relay running a NJ#5 US#9 time of 10:38.16. From there it was a tale of grit, depth, and great coaching decisions to win their fourth straight State Relay Championship and 27th overall. The most by any team including all group sizes, the second best is Asbury Park with 15 their last coming in 1995.

After the gold medal run in the DMR CBA finished second in every other event but the 4x200 in which they were seeded fifth but placed third. This was a battle won with 72 total points, just six points ahead of Union Catholic. Union Catholic was head to head with CBA on the track and in the team scores most of the meet winning five events, two in the field.

It was CBA's task to consistently find more points and balance out the talent they had on their squad. One of the senior team leaders in the interview above, Brian Hill, brought up one of the key elements with his team's victory. "The 4x800, the three other guys on my team, that's CBA right there." Hill reflected, "Guys who have never run in the state championship coming in and then stepping up big time, helping the team get critical points there at the end."

That second place 4x800 team, which ran 8:17.46 for eight points, consisted of Tanner Crochet, Brian Hill, Troy Hill, and William Huntley. For the full team's breakdown where their points came from check the table below or through this link. 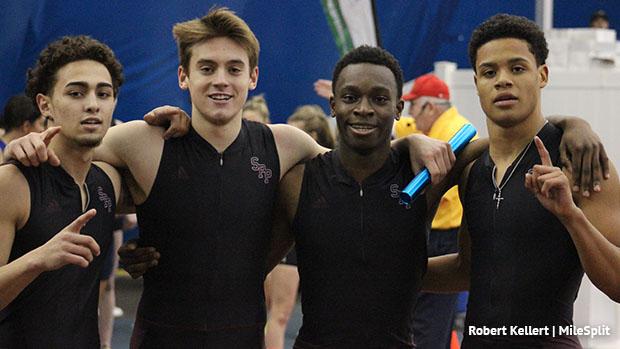 Union Catholic who was second as a team in this meet won multiple events. One of the best times they posted came in the sprint medley and ranks US#6, their time 3:36.07. CBA was second in that race with 3:36.65 US#8.