Interview with Robert Enck of Lawrenceville School who won the 1,000m.

Excuse the pun but New Jersey really did have a great weekend at the Bishop Loughlin Games especially in the field events. Here are the meet leaders as well as some major highlights.

In the boys shot put C.J. Licata of Gill St. Bernard's School threw a US#1 mark of 60-9.5. That is his best ever indoors and a great sign of things to come this winter. He also placed fifth in the weight throw with a 53-5.5, fellow NJ thrower Paul Brennan of Princeton was third in that event at 55-8.75.

Caroline Dannenbaum of Pingry School cleared 12-0 for the first time in her career on Saturday to win the Girls Pole Vault by six inches. That is tied for NJ#1 US#9 right now.

Montclair senior Shelby Bigsby hit a big time early season mark in the girls shot put throw with 41-5.25. She's gone over 44 feet indoors before but never over 38 in December, she is ranked NJ#1 US#6. 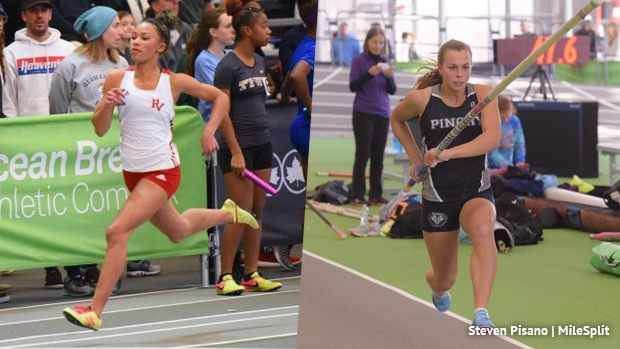 Aliyah Taylor of Rancocas Valley finished second overall in the 300m running 39.42 US#4 while winning her heat, that is fifth all-time in state history. Only Cameron Hinton of Franklin HS in Maryland was ahead of her at the meet with 39.40. Flora Ahiarakwe of Winslow also finishing strong was sixth with a 40.78. See the top five all-time listed below.

State 800m champion Victoria Vanriele of Governor Livingston opened her season with a 1:37.10 US#5 in the 600m to finish third.

Reanda Richards of West Essex earning a second place finish in the 55m hurdles and leading the state with a time of 8.36. Her career best is 8.29 at last season's Sectional Championships.

Atharv Kulkarni of West Windsor Plainsboro North finished fourth in the 600 meter running 1:24.02 US#7. He won his heat by over a second and that was his first recorded 600 meter dash. Kulkarni was eighth at last year's indoor Meet of Champions where he ran his best winter 800 meter time of 1:57.74.

In the 1,000 meter Robert Enck of The Lawrenceville School won the meet out of heat 2 with his time of 2:34.69 US#8, his interview is located at the top of the article.