Chris Romero of Voorhees high school continued a long history of New Jersey success at the Nike Cross Nationals Northeast Regional. On Saturday he won the boys championship race with the only sub-16 minute time of 15:56. We'll see this star senior at Nike Nationals in Portland, Oregon on December 2nd.

He was feeling confident coming off a strong state season with second place finishes at the Group 2 State Championships and the Meet of Champions. Romero has run this Northeast event two times before, as a sophomore he finished 12th running 16:14 and last season he was 74th with a 17:05.

He wasn't the only New Jersey individual to qualify with two others earning their way to Oregon as well. Will Hare of Princeton finished fourth running 16:13, an improvement from 14th at this meet last year as a junior. The girls race saw NJSIAA Meet of Champions winner Monica Hebner advance to NXN with her fourth place run of 18:49. A great improvement for the Northern Highlands senior who finished 88th and 71st the previous two years.

All three New Jersey individual qualifiers have committed to the University of Pennsylvania. Just missing the cut off was sophomore Nicole Vanasse of Pingry in sixth at 19:00 and Middletown South senior Madison Brand in seventh at 19:02. 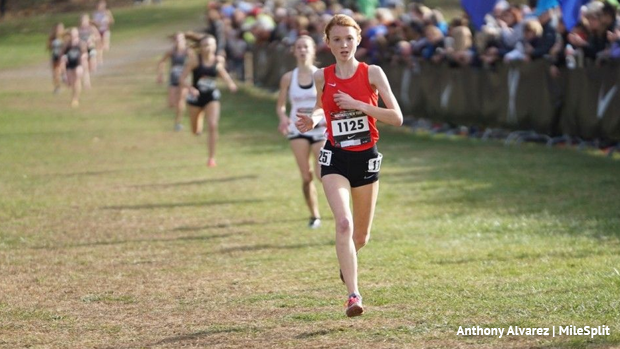 The team front saw a lot of success for the Garden State as well.

Coming in as NJSIAA Meet of Champions winners and Group 4 state title holders the North Hunterdon girls had some remarkable momentum and punched that ticket to Portland, Oregon. They won the Northeast Regional as a team with 137 points and a 20:03 team average. The Lions were led by Chloe Gonzalez in eighth running 19:04.

The Kingsway girls were second with 171 points holding off Pennsylvania's Fox Chapel Area squad in third at 189. Kingsway was led by Alexis Mullarkey in 23rd with 19:39 and will be heading to Nationals with North Hunterdon.  Outside the qualifying spots from New Jersey... Red Bank Catholic girls finished eighth with 259 points, Middletown South 10th at 277, Ridge 11th at 288, and Westfield 12th 327 points.

In the boys race Christian Brothers Academy qualified for their ninth straight appearance at Nike Cross Nationals. Led by Brian Hill in eighth running 16:23 the Colts scored 123 points and averaged 16:47 with a 42 second top five split. They won the national title in 2011 and have had top five finishes in four of the past seven years.

Outside of qualifying Kingsway boys were fourth with 198 points, Princeton fifth at 223, and Haddonfield 12th with 314.