Will Christian Brothers Academy, the greatest program in state history, return to the top? Will Devin Hart of Point Pleasant Boro become a member of the exclusive sub 15:20 club?

Those questions and more will be answered when the state's best clash inwhat has the makings of yet another thrilling NJSIAA Meet of Champions when the 46th annual meet is held on Saturday at Holmdel Park.

CBA, the Co-NJ #1 team, finds itself in a similar situation to last year when the Colts came into the M of C undefeated and ranked No. 1 in the state. But unlike last year, CBA, which owns a state record 21 M of C titles, has lots of added motivation as it seeks to avoid being upended for the second straight year.

Coach Sean McCafferty's pack is led by senior Brian Hill, who won the Non-Public A state title last week to lead CBA to the team title.

CBA, which held out some of its key runners last week when it averaged 16:31, will have all its top guns on the line for this one when it clashes with a loaded field that is led by Co-NJ#1 Kingsway, NJ #3 Princeton, the defending champions, and NJ #4 and state Group 3 champ Mendham.

Kingsway, seeking to become the first boys champ from Gloucester County, earned a share of the state's No. 1 ranking after its remarkable performance last week when it had a 1-5 compression of just 11 seconds and won the state Group 4 title with a 16:23 average. That's the fastest time ever for a Group 4 team at Holmdel.

In comparison, CBA's five fastest runners at Holmdel this season have an average of 16:17.

Since its last matchup, Kingsway's pack has tightened up considerably, and CBA has continued to get faster. All the ingredients are there for a classic battle.

Individually, the undefeated Hart, a junior, is a big favorite to cross the line first and join Eamon Blanchard of Lacey (1994) as the only boys from Ocean County to win.

Hart, the outdoor 3,200 winner at the Meet of Champions last spring, won the Group 2 title last week in an Ocean County record 15:34, No. 20 in Holmdel history.

Hart, eighth at the M of C  last year, has said all season long that his goal is to go under 15:20 at Holmdel this season. If he does, he'll become just the sixth boy to ever break that barrier.

Hart's biggest competition should come from Chris Romero of Voorhees, Will Hare of Princeton, Brian Hill of CBA, Jack Stanley of Mendham, and Fahd Nasser of McNair.

Romero hung right with Hart for nearly 2.5 miles last week when he ran 15:41 to place second in the Group 2 race.

The undefeated Hare, 10th last year, won the Group 4 title in 16:01, but had a lot left in the tank and should drop his time considerably. Hill, who ran very controlled when he won the Non-Public A title in 16:05, also has the potential to go well under 16 minutes.

Nasser, who won the Group 1 race in 16:15, is a big underdog. But he could surprise a lot of people if he can handle a faster pace at the start. Stanley has been getting faster and faster each week and was the surprise winner in Group 3 last week in 16:01. 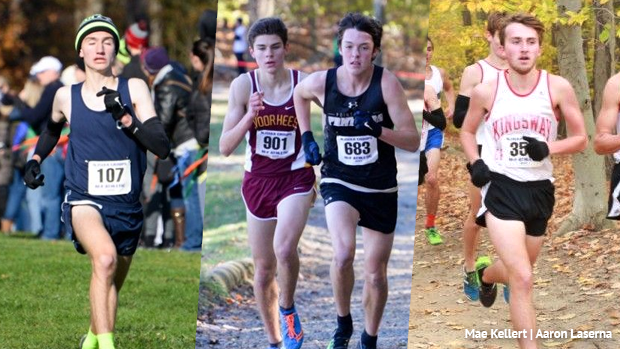