The hyped up Group 3 showdown did not disappoint. As they became visible out of the final wooded descent Monica Hebner of Northern Highlands and Alyssa Aldridge of Mainland Regional were battling way out front. Half way down the final straight away Aldridge took over the lead with a head of steam and never looked back as she crossed the line at 18:18 to win her third straight Group 3 title. Hebner only two seconds behind at 18:20 to finish runner up and ready for a rematch at Meet of Champions.

The victory meant even more than usual for Aldridge who wasn't sure she'd even be able to defend her title when she was dealt a summer training injury that took away the first half of her season. "I know there's no guarantee for anything, there never is, but to me envisioning a season where I'm just giving the title away was just heartbreaking for me," said Aldridge post-race. "So it's just amazing to be out here, you know next week might not be my week, but to repeat here again this week is just so rewarding." 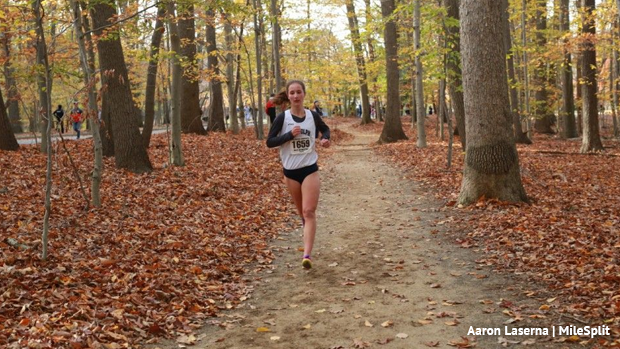 Randolph junior Abby Loveys had the third fastest time in the merge with her 18:41 to win Group 4. Her eighth victory this fall Loveys has been having a tremendous season and is in contention for the state Meet of Champions title next week. She is the second Randolph girl to win and the first since Elizabeth Lansing did so in 2013.

Sophomore Chloe Gonzalez of North Hunterdon was the only other girl under 19 minutes in that race when she finished second at 18:49.

Rachel Kenny won the Group 2 Championship with a big course PR of 18:51. This win was something the Matawan senior has been looking forward to accomplishing since she finished second to Briana Gess in 2016. Kenny is the first from her school to win a state cross country title. Nicole Cassavell of Voorhees was second at 19:19 and Madison Coppolino of Sterling third at 19:24.

WATCH EVERY RACE FROM GROUPS HERE

In the Non-Public A race Nicole Vanasse of Pingry and Jerika Lufrano of Union Catholic battled it out for the title. Vanasse earned the win with her 18:45, Lufrano second at 18:51 both athletes were among the 13 girls who broke 19 minutes on the day out of the 783 combined competitors. Vanasse, only a sophomore, is only the third girl from Pingry to win a state title and now has five wins on the season including a Somerset County and NJISAA Prep State championship run.

Another athlete who has been stepping up her game for cross country won the Group 1 title. Park Ridge Emerson's Samantha Green led Group 1 by 11 seconds with her 19:30. The first from her school to win a state title, this was Green's first fall state meet action having dealt with injuries in previous years. She's heading to her first cross country Meet of Champions race this coming Saturday. Freshman Sophia Lore and senior Izzi Gengaro of Mountain Lakes finished up the top three with their times of 19:41 and 19:42.

In the Non-Public B Championship Kate McAndrew of Morris Catholic continued the state meet success she saw in outdoor track to win her first cross country title after her 19:41 run.  She dropped 30 seconds off her Holmdel best time to earn this win. Anna Schaller of Montclair Kimberley Academy came through the line in second at 19:54 and freshman Sarah Hanifin of Villa Walsh Academy third 20:09.

You can view the full individuals and team merge here. Good luck to everyone who advanced to the Meet of Champions.