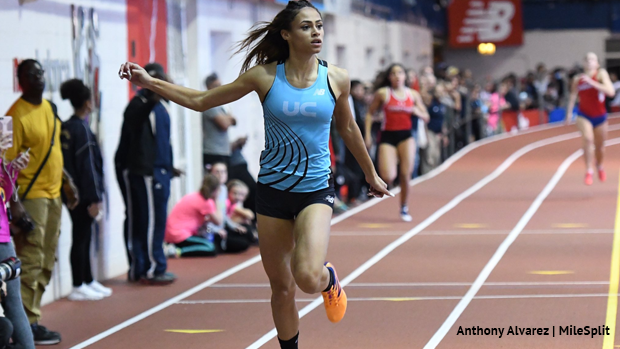 For the second time this week we're reporting that a New Jersey athlete is gaining upon a national record. On Wednesday it was Alyssa Wilson who threw within five inches of the shot put record, today it is Sydney McLaughlin who improved upon her own US#2 all-time PR in the 300 meter.

McLaughlin crossed the 300 meter finals line with a time of 37.11 on Saturday night at the Molloy Stanner Games in New York. The national record for the high school event is held by Francena McCorory who ran 36.96 in 2006. McLaughlin made it to the finals cruising through prelims with a 40.65 earlier in the meet.

The high school Olympian has held the US#2 all-time position since her sophomore season when she ran her previous PR and national sophomore record of 37.49 at the Armory Track Invitational.

It has been an exciting season so far for the University of Kentucky bound star. She moved up to third all-time in the New Jersey long jump with a US#1 mark of 20-07.25 and recently ran a 55.8 leg on Union Catholic's US#1 4:08.28 sprint medley team at Union County Relay Championships. You can watch that sprint medley race through this link.

Interview with Sydney McLaughlin after her 2017 season on track debut at the Wayne Gardiner Holiday Relays.